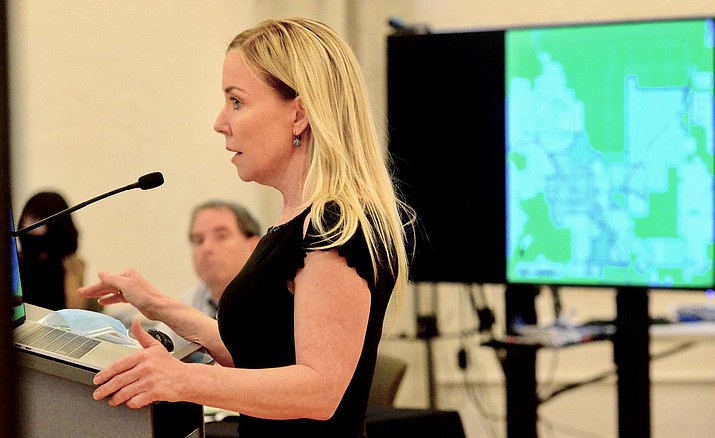 Lisa Borowsky speaks at a recent Cottonwood City Council meeting. She and her father, Eric, are set to present a revised Spring Creek Ranch development plan to the Yavapai County Planning and Zoning Commission on Thursday, Sept. 17. VVN/Vyto Starinskas

COTTONWOOD - A full Sept. 17 agenda includes some high-profile items as the Yavapai County Planning and Zoning Commission tries to get caught up on a backlog of hearings.

Nearly one year after developer Eric Borowsky, and his daughter, Lisa, began presenting their Spring Creek Ranch development plans to the public, they'll return to the Planning and Zoning Commission on Thursday, Sept. 17.

The meeting will be streamed live, and only about 20 people will be allowed inside the Cottonwood County Annex Center's boardroom for each hearing, due to COVID-19 distancing requirements, according to Leah Brock of the Yavapai County Planning Department.

Attendees for each hearing wil receive a number at the front door of the building The lobby and the upstairs overflow meeting room will not be available to view the meeting. The rest of the building is closed to the public.

A link to the meeting can be found at yavapai.us/devserv, under the Planning & Zoning cases tab, or by clicking here.

A link to a survey about each of the four items on the Sept. 17 agenda can be found on the Planning & Zoning tab as well.

Spring Creek Ranch will be part of a crowded agenda, looking to get a positive recommendation from the Commission before taking its 282-acre planned mixed-use development to the county's Board of Supervisors for final approval.

Also on the Commission's Sept. 17 agenda is the Nature of Wildworks. Mollie Hogan seeks a use permit for a residentially zoned, eight-acre Cornville property in order to move a wildlife care center in from southern California.

There is also a use permit hearings for both a Cordes Lakes commercial well and for a Cornville building to be converted into a guest house.

The initial Spring Creek Ranch proposal led to multiple public meetings that were well-attended, including a meeting held by the Cornville Community Association.

The Planning and Zoning Commission hasn't met since March, as the county put a hold on development hearings due to COVID-19.

Last December, the Borowskys presented, to the Commission, a plan that included 1,850 manufactured home lots, 400 RV pads, 400 rental units and a 200-unit assisted living facility on property they co-own, located off of State Route 89A, near Page Springs Road.

The Commission, which was without District 3 Commissioner Mark Mumaw, due to illness, on the day of the hearing, voted 5-4 to recommend the Board of Supervisors disapprove the proposal.

One Commission seat has changed since December; Linda Buchanon has replaced Bruce George as one of the two District 2 commissioners.

The Borowskys decided to not take their initial proposal to the Board of Supervisors. Their revised plan, reduced by more than 1,000 units, still led to public meetings where most in attendance opposed to various elements of it, especially the size and number of people it might involve.

The Borowaskys have made two presentations to the Cottonwood City Council. Cottonwood owns one of the three wells on the 282-acre site in the plan proposed to the county and officials want to eventually annex acres of state trust land located between the Borowsky's property and the current Cottonwood city limits.

The Council voted, on Aug. 18, to proceed with initial annexation steps to annex the Borowsky's property, including about 12 square miles of Coconino National Forest land to stretch current city limits to the ranch, but that process is lengthy, involves negotiations and will include at least two more Council votes.