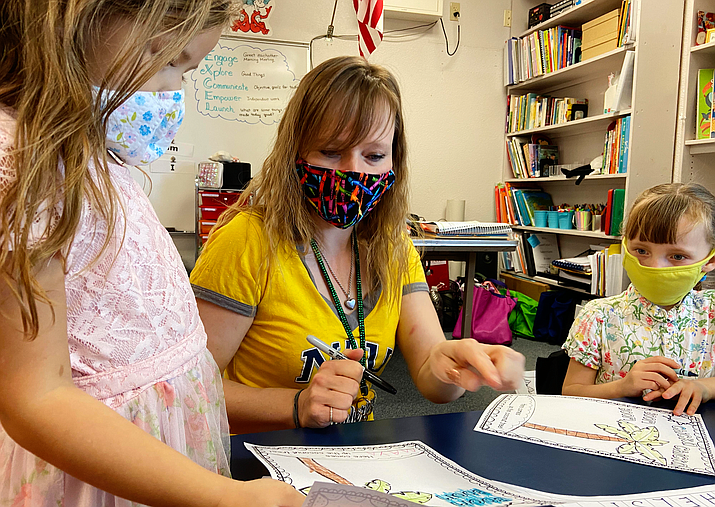 COTTONWOOD — About 8:20 a.m. Thursday, Miranda Mosby dropped her daughter off at school.

Of the two, Mosby said she was the nervous one.

Although Cottonwood-Oak Creek schools do not officially reopen for face-to-face learning until Monday, Sept. 14, the district has invited its K-2 students back a week early to get a sneak peak into campus life. 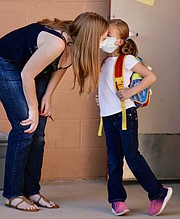 Miranda Mosby kisses her 5-year-old daughter Skyler Peterson before dropping her off to kindergarten at Cottonwood Community School. Cottonwood-Oak Creek opened its schools Sept. 8-11 for the district's kindergarten through second grade students for a phased-in reopening before schools officially open on Sept. 14. VVN/Bill Helm

"We had the ability to do this," Superintendent Steve King said. "Part of our on-site learning supports, to give those kids a little jump start, it's kind of like dipping our toes into the water rather than jumping in."

"We did this to help get these children acclimated to their classrooms, their teachers and their fellow students," King said.

King explained that the district's four K-8 schools were involved in the phase-in.

At Cottonwood Community School, kindergarten students were invited back on Tuesday and Thursday, first- and second-graders on Thursday and Friday.

"The goal is for students to become familiar with the campus, learn routines and safety procedures," Cottonwood Community School Principal Matt Schumacher said. "Students will receive breakfast on campus to practice cafeteria routines, and will be sent home with a lunch at no cost."

Schumacher estimated that about 40% of the school's kindergarten students returned on Tuesday.

"Maybe we'll do this every year," Schumacher said. "It's a delightful way to start the year to welcome parents and children. No hurriedness."

A year ago, Samantha Cantley taught fourth grade at Cottonwood Community School. This year, Cantley has switched to first grade. For her, the change is a good thing.

"They needed another teacher for the first grade," Cantley said. "I've always liked the littler kids."

Before children began to arrive in her classroom, Cantley said she was looking forward to building relationships with the children.

"We've already met on Zoom, but we'll be going over routines, procedures, how to wear a mask," Cantley said.

Nancy Erickson, vice principal at Dr. Daniel Bright School, said Wednesday that the phased-in approach to opening the district's campuses was an opportunity to assess where children are academically.

"Especially for kindergarten, see where they are, getting them started," Erickson said. "This gives them a little time to adjust, to acclimate."

Once the district's schools open their doors on Monday, the combination of online and in-person students the next four weeks will also be a phase-in of sorts, as Cottonwood-Oak Creek works toward the last day of the first quarter, Oct. 9.

Online learning will be available to any of the district's children for the entire 2020-2021 school year, King said. 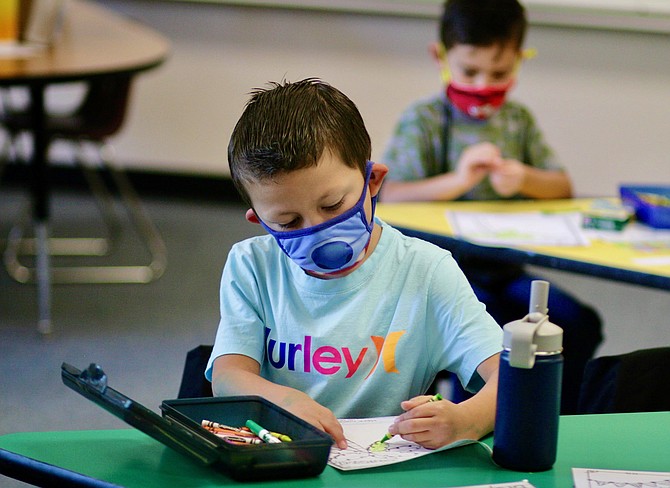