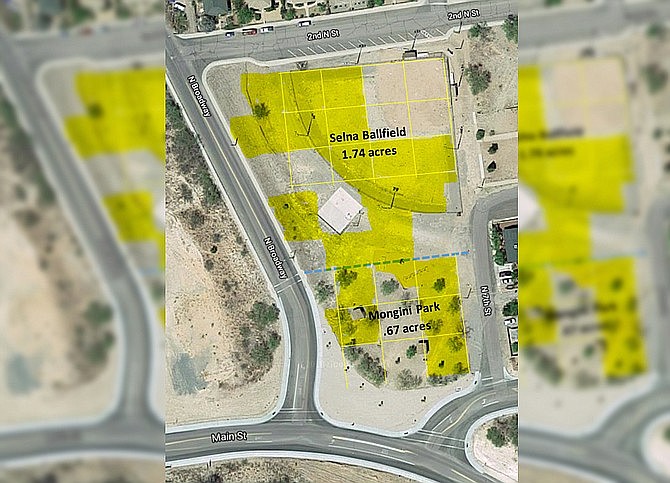 This is a basic image is of Selna-Mongini Park, which now has a master plan to be more fully developed. It’s one of the projects the Town of Clarkdale hopes to make progress on — and obtain matched grant funding for — in the months ahead. VVN file

“We have continued to work with ASU’s Sustainable Cities Project,” Hlavinka said. “We were have been fortunate to have some interest in our projects, including two capstone students (working on their senior exhibition projects) and one faculty member who worked with us during the spring.”

Hlavinka said there are several projects ASU students will be working on this fall.

“We are fortunate to get a little bit more breadth of projects that apply to those students now,” Hlavinka said. “We had two weren’t sure if we were going to be able to continuse this.”

These include looking at the concept of a sustainability park, engineering students who wil examine the Bitter Creek bridge, a “smart town” infrastructure program that focuses on broadband Internet access, and an affordable housing program.

The Bitter Creek bridge is still only one-lane, Hlavinka said.

The affordable housing program would tie into the Elliott D. Pollack and Co. housing study that has the City of Sedona as the lead client, but which will cover all parts of the Verde Valley, Hlavinka said. Clarkdale committed $4,000 to that study.

Hlavinka said when a town is involved with university projects, it leads to added exposure and potential visitors due to the way students and faculty make their municipal projects known using social media and other means.

“Because we have Arizona State students helping with projects, we are being actively marketed by ASU, and that’s monumental,” she said.

There will be $5,000 committed to Clarkdale Town Park, Hlavinka said. A handicapped ramp for playground equipment needs to be repaired.

“We are getting a lot of activity at the park, particularly after the pandemic, and we really would like to get that ramp repaired before someone hurts themselves or a handicapped person needs the ramp,” Hlavinka said. “We are working on our curb cutouts around the park.”

The Council recently approved a master plan for Selna-Mongini Park that had community input. Hlavinka said the town is looking into Arizona State Parks grant opportunities to fund work related to the park, if the town can show it has matching funds or is starting the first phase of the project.

“You’ll notice paving was done around the parking at that park,” she said.

Hlavinka said representatives associated with the Arizona Land and Water Conversation Grant funding have been out to Clarkdale to see the water design aspect of the park, and are willing to match funds, as it is considered a STEM project with an educational component.

“There has been talk at the legislature about softening the 50-percent matching requirement, in some way, and the remediation we’re doing there might measure up,” Hlavinka said.

Vice Mayor Richard Dehnert seemed pleasantly surprised to hear that finding such funding for the park might be close at hand.

“I thought it would take forever to get that project moving forward,” Dehnert said.

Regarding personal time off, Clarkdale allows staff to buy back their time off, with some restrictions. Hlavinka said she favors allowing employees to have this option open to them this year, as they did not receive a cost-of-living increase due to decreased revenues amid COVID-19.

Regarding economic development, Hlavinka said, the town has encountered what she described as remarkable marketing opportunities recently. Maps with tourist destinations are among these opportunities.

Hlavinka praised Public Works Director Maher Hazine for working on a breezeway between his department and Community Development, at the Town of Clarkdale offices on Main Street, without dipping into an allotted $20,000 that had been budget in Fiscal 2020 for such a project. Hlavinka suggested moving that $20,00 to a fund devoted to the Selna-Mongini Park improvements, and none on the Council objected.