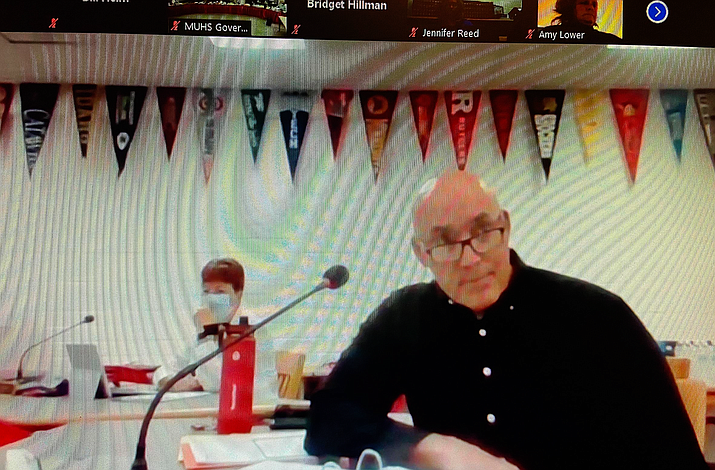 COTTONWOOD – Sept. 17, about half of Mingus Union's student body will be invited back to school. The next day, the other half.

Thursday, the Mingus Union School Board voted 4-1 to open school to face-to-face instruction. That is based on a hybrid plan that essentially limits classrooms to one-half of their normal population.

The plan is for students to be online, but in class, and with their adviser. “It's one step closer,” said Mingus Union Principal Genie Gee.

Superintendent Mike Westcott explained that the board's vote to reopen was a success because Mingus Union can now take a step closer to being where it was before the COVID-19 pandemic necessitated school closures in mid-March following Spring Break.

“With this, we'll have a legitimate presence of kids on campus,” Westcott said. “Though it's not perfect, it's that first step. It's huge that we're moving in that direction. We're doing this based on what the benchmarks have indicated. We're trying to take into account the needs, health and safety of all of our stakeholders.”

“No other school has the considerations we have in terms of bringing kids back,” Westcott said. “Every school is different. That's why our feeder schools are doing something different. Our concern is how do we do this the best way possible, the healthiest way possible.”

Although Board Member Chip Currie said he was apprehensive about opening school on Sept. 17, he voted yes.

Currie explained that reopening school during the pandemic is one of the more difficult decisions he's been involved with.

As she presented the school's hybrid plan to the board, Gee said she is still working out a few of the details to the phased-in plan, such as which students will be on campus which days.

“Students will continue online, but also on campus with their homeroom teacher based on the alphabet,” Gee said. “All of our teaching staff has had its eyes on this plan.”

Students would be on campus from 8 a.m. until noon on their assigned days. However, all students would continue with their online learning the days they are not on campus.

Students who are not ready to return to campus may continue with the online learning model, Gee also said.

To restrict possible COVID-19 exposure, students will be in a single classroom each day, with their advisory teacher. Since shifting to online learning, students have been working with one of approximately 60 facilitators.

“The plan is to keep doing this, to monitor the benchmarks,” Westcott said. “Then the board can discuss it in October, the week before fall break.”

Genie also told the board that everyone on campus will wear a mask. “No questions.”