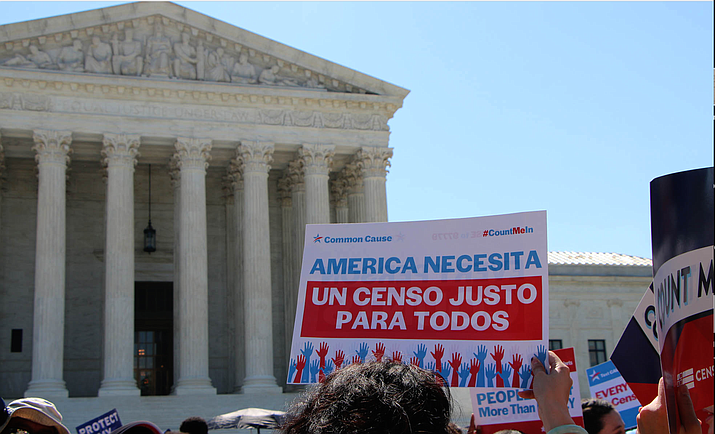 This is not the first time the Trump administration’s census plans have been in court – this photo shows protesters in 2019 outside the Supreme Court, which struck down an administration plan to add a citizenship question to the census. Both sides believe the latest fight, over attempts to exclude undocumented migrants, could also land in the Supreme Court. (File photo by Miranda Faulkner/Cronkite News)

WASHINGTON – A federal court Thursday blocked President Donald Trump’s plan to exclude unauthorized immigrants from the census, calling the order a clear violation of the law would cause lasting damage.

Arizona advocates welcomed the ruling in the case, in which the city of Phoenix was one of numerous government and private plaintiffs, with one attorney calling it a victory over the president’s usual “fearmongering.”

But neither side expected the ruling by a three-judge panel of the U.S. District Court for the Southern District of New York would be the last word on the issue.

“Anyone who has been watching how the Trump administration approaches any loss can see there’s a very slim to no chance that they won’t appeal it to the Supreme Court,” said Meena Anand, 2020 census senior fellow at the New York Immigration Coalition, which was the lead plaintiff in the case.

Requests for comment Friday from the White House, the Commerce Department and the Justice Department were not immediately returned.

At issue is Trump’s July 21 memo on “excluding illegal aliens from the apportionment base following the 2020 Census.” The order directed the Commerce Department to deliver two census counts – one with the total population of the country and another excluding undocumented immigrants.

The every-10-year count determines not only the allocation of much federal funding for the decade between censuses, but its main purpose is to determine how many seats each state will get in Congress.

Trump’s order said it “is the policy of the United States to exclude from the apportionment base aliens who are not in a lawful immigration status.” If carried out, it could exclude millions of unauthorized immigrants in the U.S. – and more than 250,000 in Arizona – from being used to allocate congressional seats.

“Giving congressional representation and political influence to illegal aliens – people who have blatantly disregarded our laws – would be a perversion of our democratic principles,” said a White House statement at the time of the signing.

The order was challenged almost immediately in court, with plaintiffs arguing that it would wrongly deprive immigrant communities of federal resources and congressional representation. They also said it’s timing was aimed at suppressing immigrant response rates to the census.

“The administration was up to its usual fear-mongering and shenanigans,” Anand said. “We were pretty certain from the get-go that it was unconstitutional and illegal. It was really about trying to suppress the count.”

The district court agreed with the plaintiffs, saying the administration’s arguments were not “remotely convincing.” Despite the president’s assertion that it is “the policy of the United States” to exclude undocumented migrants, the law is clear and the president has to follow the law, the judges wrote.

It was important to rule now, the court said, “because there are no do-overs for the census, the adverse consequences of that delay could resonate for a decade.”

“Now what you essentially have are states putting their thumbs on the scale … and inviting illegal immigrants to come live here,” Mehlman said. “Any additional seats that a state like California and New York picks up as a result of having a large illegal alien population is necessarily a seat that other states lose.”

But Jose Patino, education director of the Arizona immigration community group Aliento, said that even before the court ruled, the memo had already done damage to immigrant communities by suppressing census response rates. All it takes is a look at the ZIP codes responding to the census to see the effect, he said.

“If you know Chandler, it’s called Little Mexico, which is reporting 50%. While if you go to Gilbert, you get 75%,” Patino said. “There’s specific areas where immigrant people tend to live, and we’re just getting lower rates.”

An undercount would mean less congressional representation and fewer federal resources. With fewer dollars, the racial disparities in education, health care and infrastructure will grow, Patino said. He saw these structural differences while teaching in Avondale where a larger immigrant community lives on the south side of the city.

Isis Gil, the financial director of the community group Puente in Arizona, said her group was confident courts would strike down Trump’s order.

“We expected, in totality, for it to be discredited,” Gil said. “He just had no legal precedent.”

Anand said she is just as confident of victory if the administration appeals, as she expects.

“It very much looks like the panel of judges really dotted their I’s and crossed their T’s on this,” she said. “I really don’t see how this Supreme Court would be able to come to a different conclusion.”

Even if it does go to the Supreme Court, Gil said community groups like hers will continue working to organize and register immigrant communities with the census.

“We know what we need to do. And that speaks to the reality of organizing and movement work that must continue regardless of what proposition we face,” she said.