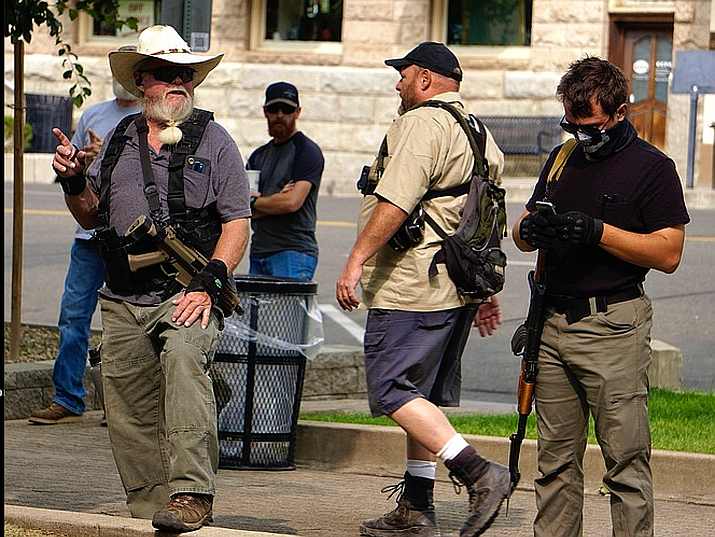 Armed counterprotesters were on the plaza in downtown Prescott Friday, on rumors that a Black Lives Matter group was going to be there. The BLM contingent did not attend. (Aaron Valdez/Prescott Daily Courier)

PRESCOTT — Three events on the courthouse plaza overlapped Friday, Sept. 11, in downtown Prescott – a 9/11 tribute, an anti-racism protest, and counterprotesters turning out on rumors Black Lives Matter was coming to town again.

The BLM contingent did not materialize, except for one or two people who may have been in support of BLM, said Dwight D’Evelyn, spokesman for the Yavapai County Sheriff’s Office.

But they did not stay long. The same was said about six to eight people who were reportedly with Stand in Solidarity Against Racism. They went around the courthouse a few times and left as well.

The bulk of the crowd downtown was there for the 9/11 tribute, which included Ken Bennett, former Arizona Secretary of State and former councilman and legislator from this district.

Also downtown Friday afternoon was a strong show of law enforcement because of the counterprotesters and the rumor of BLM attending.

Regarding the possible clash of opposing protesters Friday, Sheriff Scott Mascher stated on Facebook on Thursday, “Contrary to some social media posts, I have not asked for assistance from any community groups. The Sheriff’s Office is working with the Prescott Police Department and others and will have adequate resources to handle this event.

“It is our goal to keep the demonstration peaceful and safe for all present. I do ask that those who choose to attend and exercise your First Amendment right please remain civil and refrain from instigating confrontations. This allows all sides the constitutionally protected freedom of expression.”

He added thanks to “the community for their ongoing support of our law enforcement officers. … Remember, local law enforcement is here to keep the peace and to maintain the lawful exercise of individual rights.”

The heightened efforts follow a protest one week ago at which BLM supporters and counterprotesters attended.

Letter: Where are protests of violence vs. officers?
A vow to fight on: Arizonans react to Chauvin convictions
Staycations: Courthouse Plaza is heart of activity in downtown Prescott
Prescott remembers Sandra K. Markham
Future of the courthouse Supporters rally
Event Calendar