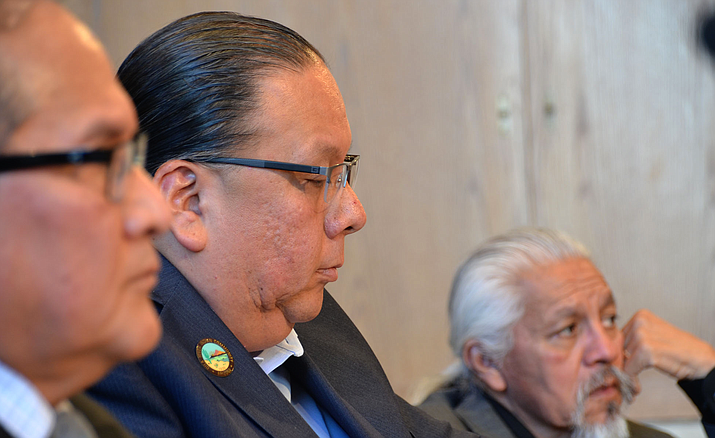 Gila River Indian Community Gov. Stephen Roe Lewis, center, during a Senate hearing in 2019. Lewis on Thursday told a House committee that an accurate census count is vital to tribes, but that a Census Bureau plan to end counting early could threaten the count. (File photo by Keerthi Vedantam/Cronkite News)

Lewis joined other witnesses at the House Oversight and Reform Committee hearing to warn against an early end to the count.

“At this point the Census Bureau needs more time to do its data collection and post-data collection process,” said John H. Thompson, who was director of the bureau from 2013-2017.

No bureau representatives appeared at the hearing, but Republicans on the committee pushed back against the notion that the proposed timeline poses any problems, noting the 89.4% total response rate to the census so far. Rep. James Comer, R-Ky., cited previous briefings with three current Census officials who said the “2020 census can be accurately and fully completed by Sept. 30.”

The hearing came just days after a federal judge temporarily blocked a Census Bureau plan to end enumeration operations on Sept. 30, a month sooner than had been planned. The judge in that case said plaintiffs, including two Arizona tribes, had raised “serious issues” about the shortened timeline.

That was supported by witnesses at Thursday’s hearing on “Providing the Census Bureau with the Time to Produce a Complete and Accurate Census,” with Thompson testifying that ending the count early could affect the “accuracy and quality” of the 2020 census.

“Hard-to-count communities have a significantly lower level of self-response,” Thompson said. “Not making appropriate enumeration attempts with staff who have the proper understanding and language skills in these areas will lead to a higher proportion of incomplete responses.”

That is a problem in many tribal areas, where cultural, language and logistical challenges in the often-rural areas makes it hard to get an accurate count.

But Rep. Paul Gosar, R-Prescott, noted that the bureau is catching up quickly, even in states like Arizona that trail the national average for responses.

“Census data reported as of yesterday (Wednesday) that 80.8 percent of Arizona is enumerated,” Gosar said. “This is well below the majority of states yet just a few days prior to this report, the Census Bureau stated was just 76.2% enumerated.

“This appears to be a very productive spike in a short number of days” he said.

As of Thursday, the total response rate for Arizona had risen to 81.7%, fifth-lowest in the nation.

In an ordinary Census year, enumeration would end July 31 and the bureau would deliver its count to the president by Dec. 31 – a date that is set by law. But that schedule was thrown into disarray by COVID-19, which affected response rates and took enumerators out of the field early in the count.

Civil rights groups, individuals and local governments, including the Gila River Indian Community and the Navajo Nation, sued to keep the Oct. 31 date. They argued that a census undercount could severely affect minority communities over the next 10 years, in terms of congressional representation, federal funding and more.

A federal district judge in California agreed with them Saturday, ruling they had raised “serious issues” about the shortened calendar and ordering the bureau to halt any moves toward winding down enumeration operations early. Her order lasts until Sept. 17, when a fuller hearing will be held on the issue.

If the current Sept. 30 end date holds, that leaves less than three weeks to complete the non-response enumeration period and count thousands of missing households.

The bureau has not released total reporting rates for tribal areas, but it does release self-response rates, which make up the bulk of responses. Lewis noted that while the national self-response rate for the census was 65.5% Wednesday, the rate on the Gila River Indian Community was just 10.2%.

“If the census was to end today I could only be certain that 2,200 of our over 22,000 tribal members would be counted,” Lewis said.