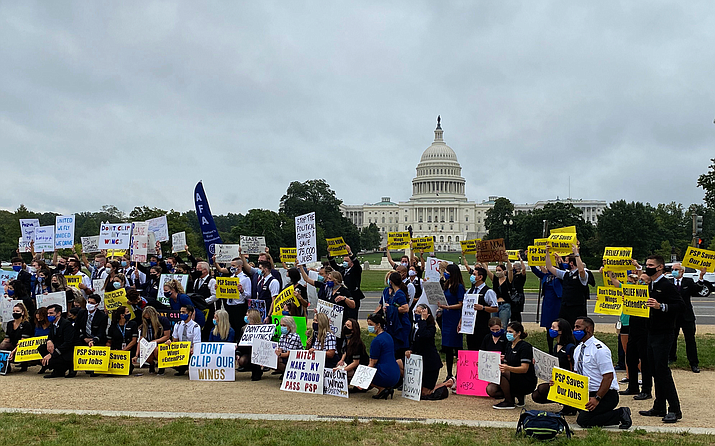 Flight attendants and other airline workers rallied at the Capitol this week to push for extension of the Payroll Support Program, a $25 billion fund to help airlines in the first COVID-19 relief bill. That fund expires Oct. 1, but the Senate remained deadlocked Thursday on a new coronavirus relief bill. (Photo by Mythili Gubbi/Cronkite News)

WASHINGTON, D.C. – The Senate on Thursday failed to advance a new COVID-19 relief bill, continuing months of partisan stalemate over a plan while people like Arizona native Koala Infante can only wait and watch.

Infante, a flight attendant for United Airlines, joined dozens of other airline workers this week demanding that an extension of aid for airlines be part of any bill to replace the $2.2 trillion package passed earlier this year. For Infante, it could mean the difference between working and being unemployed.

“I am in the most junior ranks at United, so I will be losing my job if this does not pass, if we do not get continued support,” Infante said during a rally at the Capitol on Wednesday, one day before the Senate returned to the issue.

That return was short-lived.

Senate leaders were unable to get the 60 votes needed to cut off debate and start voting on their bill, a $300 billion measure that has been dubbed the “skinny bill” because of its size relative to the $3 trillion Democratic-sponsored measure passed by the House in May. The 52-47 vote saw all Senate Democrats, and lone Republican Sen. Rand Paul of Kentucky, voting to block the bill for now.

Senate Majority Leader Mitch McConnell blamed Democrats for refusing to bargain in good faith for a deal that would be more palatable than what he called a “multitrillion-dollar liberal wish list” from House Democrats.

But Senate Minority Leader Charles Schumer said it was the Republicans who have not been acting in good faith, accusing McConnell of pushing an “emaciated” partisan bill “filled with poison pills.”

“It’s insufficient, it’s completely inadequate,” Schumer said Thursday. “It does not help renters put a roof over their heads or American families put food on the table.”

The Senate bill would also not include an extension of the Payroll Support Program, a $25 billion fund for airlines that was part of this spring’s COVID-19 relief bill. That funding, which was aimed at helping airlines cover payrolls, expires on Oct. 1.

American Airlines has said it might have to lay off 19,000 workers nationwide if the fund is not renewed – with as many as 1,300 of those jobs possibly coming from Phoenix.

American Airlines flight attendant Allie Malis, who joined Infante at Wednesday’s rally, said she will fight “until the 11th hour on Sept. 30th.”

“I’m going to fight tooth and nail for my colleagues, for myself, for all of aviation’s workers who I know work so hard in this job,” said Malis, who is also the government affairs representative for the Association of Professional Flight Attendants.

But some analysts question whether airlines should be first in line for federal help when there is so much need. David Ditch, a research associate for the Heritage Foundation, said that the airlines were treated very differently than other parts of society.

That was echoed by Michael Madowitz, an economist for the Center for American Progress, who said if he was “one of the 10 billion people” who lost a job during the pandemic, “I would be kind of worried that they were going to give a bunch of money to an industry that has already gotten a bunch of money.”

Madowitz blames the industry’s problems on the administration’s failure to get the coronavirus under control, and is not optimistic about a congressional solution to the problem.

“The Senate Republicans are talking about a very small bill, and the Senate Democrats are mostly where the House Democrats are, which is a much larger bill,” Madowitz said. “And the idea that you are going to do a really small bill and that airlines are going to get, you know, a pretty sizable percentage of that, I think that seems very politically untenable to me.”

Ditch said it is almost impossible to predict what will happen to PSP during congressional negotiations.

“I think that there is a chance that there will be some sort of relief that Congress provides to airlines, but there’s also a chance that there won’t be direct relief,” he said. “There are a variety of options to try to bolster the industry that are not an extension of what was passed in the CARES Act and, frankly, I think there are some options that might be better.”

Infante, who is based in Houston for United, said there’s more at stake than just airline workers’ jobs.

“Sky Harbor is life to Arizona, so if the flight attendants aren’t protected and we lose our jobs, that’s going to cause a substantial financial impact to the Arizona economy,” he said.