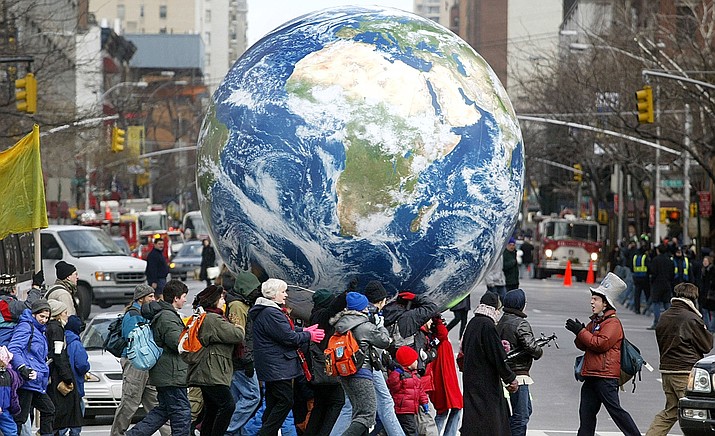 Four organizations dear to the heart of a legacy donor (Sedona International City of Peace, Mental Health Coalition Verde Valley, National Alliance for Mental Illness and Sedona international Film Festival) have come together in an alliance to offer a special event Monday, Sept. 21, at the Mary D. Fisher Theatre.

These groups have come together to illuminate and transform the pronounced divisiveness in our community and our world during International Day of Peace Sept. 21 with a first-of-its-kind “Dissolve-the-Divide” series of events at the Mary D. Fisher Theatre and Livestream through the Sedona International City of Peace Facebook page.

Dissolve the Divide between Law Enforcement and our community — featuring our Police Chief, Charles Husted and another Police Officer.

Dissolve the Divide between Law Enforcement and our community — featuring Captain Jeff Newnum, Detention Services Division responsible for incarceration of inmates and services pertaining to their health, welfare and safety.

It is the intent of this event to dissolve the divide by having audience members listen to our Sedona Police Chief Charles Husted and Captain Jeff Newman. As you listen to their humanity, their experiences and their inner conflicts and growth, it is our hope that you open your hearts to perhaps dissolve seeing them as a group versus being curious about them as individuals.

The Human library format will be used to create understanding and bring healing versus amplifying the divide. You will have an opportunity to listen and then ask questions that deepen your compassion and understanding, as well as share experiences that may have been upsetting or traumatic with an intention to heal that within yourself.

At the close of this presentation and dialogue there will an authentic forgiveness ceremony that is reflective of Sedona’s healing powers.

For three and a half years, the Sedona International City of Peace, Mental Health Coalition Verde Valley, NAMI and Spectrum Healthcare have offered meditation on Mondays at Posse Ground Pavilion and local Yoga Studios.  Over 60 Sedona healers have facilitated group meditations to bring awareness to the power of meditation to heal ourselves within, as well as when in a group to heal our community.

Worldwide film screening event: “We Are Many”

The Sedona International Film Festival, Sedona International City of Peace, NAMI and the Mental Health Coalition of the Verde Valley are proud to join 100 cities around the country for “One Night For Peace” with the premiere of “We Are Many” at 4 and 7 pm at the Mary D. Fisher Theatre.

On February 15, 2003, up to 30 million people, many of whom had never demonstrated before, came out in nearly 800 cities around the world to protest against the impending Iraq War. “We Are Many” is the never-before-told story of the largest demonstration in human history, and how the movement created by a small band of activists changed the world. Many of the communities and local organizers from the 2003 protest will partake in this special event.

“The only film I’ve ever watched where the audience started clapping halfway through!” — Huffington Post

An energizing panel addressing the issues raised in the film and exploring the power of non-violent protest will follow both screenings. Seating is limited for the free screenings at 4 and 7 p.m.

A link to view the film online will be available for those who wish to enjoy the film from the comfort of their own home for a small screening fee.

The value of this movie in this legacy program is that the donor was married to a Vietnam Veteran for 25+ years. As a spouse, she carried the commitment to his healing and also hosted with Sedona International City of Peace the first Welcome Home Vietnam Veterans event in Sedona. Subsequently this event has circled to five cities in the Verde Valley for the last seven years.

This is her passion – to create community engagement that transforms our hearts to feel each other’s pain and be instruments for our connection and joy together.

Tickets for all of these International Day of Peace Events are free and are limited. For free tickets and more information, please call 928-282-1177. Both the theatre and film festival office are located at 2030 W. Hwy. 89A, in West Sedona. For more information, visit: www.SedonaFilmFestival.org.