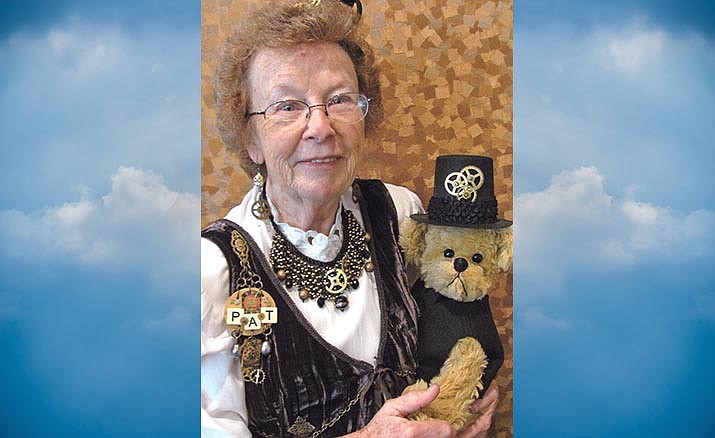 On a trip to the North Rim of the Grand Canyon in 1986, she met Eddie Lyons, the love of her life. She purchased a Native American Fetish Bear from him in the shop where he worked. Their connection was instant and powerful, recognizing each other as soul mates. They married in 1987, and after working a summer on the South Rim of the Grand Canyon, Pat suggested opening a Teddy Bear shop because a bear had brought them together. The shop, “Bear-ly Ours” was located in Punta Gorda, Florida.

After learning to make bears from Diane Gard, a well-known Teddy Bear artist, Pat designed her own bears, traveling and selling them all over the United States. Her bears, called “Free Spirit Bears”, were on the cover and featured in a National Teddy Bear Magazine in 1993.

She also designed “Fairy Bears” for the Knicker Bocker Toy Company. Pat always loved bear making the most, but later her creative mind allowed her to make Steam Punk and Fantasy Jewelry, Wall Art and Assemblages. She often used “throw away” junk to make recycled art.

Declining health and pain made the last few years more difficult, but Pat never stopped creating whatever kind of art she could still make. She touched many people and found lifelong friends among her many collectors. The love between Pat and Eddie only grew stronger after every year. Their sincerest wish is to be together again in the next life. For now, Eddie holds on to the memories of his beautiful and creative wife, Pat – his one true love.