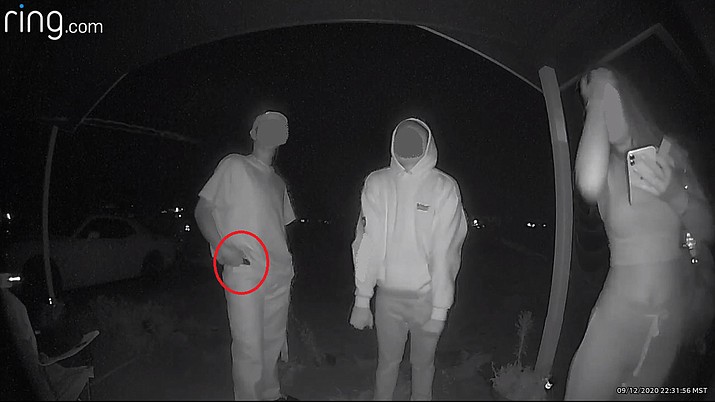 A ring.com doorbell at the home captured images of the teen grabbing the handgun in a firing grip through his shirt before going inside the home,” according to YCSO. As he ran from the house, the camera caught him holding the revolver in his right hand. YCSO courtesy image

COTTONWOOD — A Cottonwood teenager has been arrested on an assortment of felony charges after threatening party-goers with a handgun Sept. 12.

At approximately 10:45 p.m. Saturday, Sept. 12, deputies from the Yavapai County Sheriff’s Office were dispatched to the 2700 block of South Rio Verde Drive in Cottonwood.

A man reportedly pointed a gun at everyone inside the home, according to a Sept. 15 news release from YCSO.

Upon arrival, the man was gone but people who had attended a party at the home identified the 17-year-old boy, the news release stated.

By conducting several interviews, deputies confirmed that the teen came to the party uninvited, YCSO stated. He entered the home with another man and a woman.

Guests at the party reportedly confronted the teen about his age and drinking, and he responded by brandishing a snub-nosed revolver, YCSO stated.

“There was a ring.com doorbell at the home which captured images of the suspect grabbing the handgun in a firing grip through his shirt before going inside the home,” the news release stated. “As he ran from the house, the camera caught him holding the revolver in his right hand.”

Deputies then went to the teen’s home on Comanche Drive in Cottonwood.

“The suspect admitted going to the party with one other person and denied ever having a pistol,” the news release stated. “During a search of his car, .357 rounds were found. In his room, deputies located a BB gun that the suspect later claimed he used at the party.”

YCSO stated that the revolver seen in the video and described by the victims was completely different from the BB gun found and likely associated with the rounds discovered in his car. Deputies also found drug sales paraphernalia in his room.

The teen was confrontational throughout the investigation, YCSO stated.

The teen, whose name has been withheld because he is a minor, was charged with 12 counts of aggravated assault/deadly weapon, misconduct with a weapon, and minor carrying a firearm.