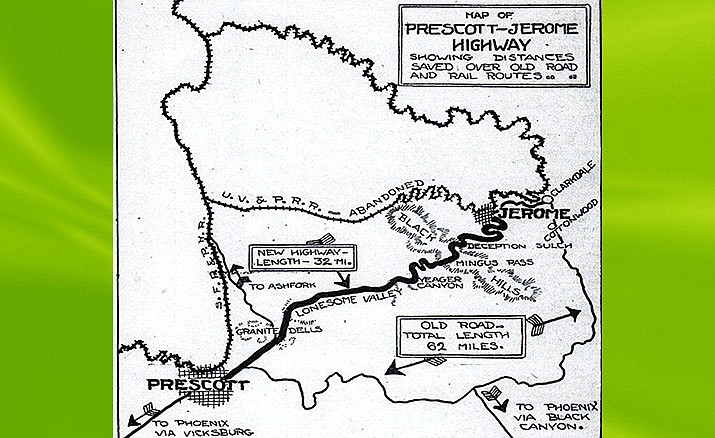 July 25: "Word was received yesterday at the office of the state engineer that it was expected that the first automobile would pass over the newly constructed Prescott-Jerome Highway today." (Arizona Republican; Phoenix; July 25, 1920; page 28.)

"NEW HIGHWAY TO BE OPENED TO TRAFFIC: If weather conditions permit, the Prescott-Jerome Highway will be open to traffic in a short time, according to Thomas Maddock, state engineer, who has returned from an inspection of this important road in Yavapai County. The work is progressing splendidly, according to the engineer who stated that practically all the drilling has been completed. The completion of the road so far as to permit traffic will depend upon the weather, but according to the present outlook, the road will be open sometime between August 5 and 15. It will be some little time before the entire road is surfaced. Although few people have been over the road, those who have consider it the most notable scenic highway in the state. The time between Jerome and Prescott by automobile should be cut to an hour and a half when the road is entirely finished. It is expected it will be used for the mails and practically all passenger transportation into Jerome and Clarkdale." (Arizona Republican; July 18, 1920; page 9.)

"Phoenix, Sept. 11. --- How to connect Jerome, the center of one of the most important copper mining districts of Arizona, with Prescott, the county seat of Yavapai and metropolis of northern Arizona, was the problem which confronted the State Highway Department on January 6, 1919, when the present administration took charge." [Governor Thomas Edward Campbell, Republican, had served as governor from January 1, until December 25, 1917, and began the first of 2 full terms on January 6, 1919.]

"Some said it couldn't be done. Some said that it would not be done and others opined that it might be done some day but not right away. There were too many mountains in the way, too many precipitous grades to overcome, too much admantine rock to blast a way through to make anything like a direct route seem possible or probable."

"Today the Prescott-Jerome Highway is a reality. With the opening of the new route to travel last week it is now possible to motor between the two towns in 2 hours or better, or in less than half the time to negotiate the distance over the old highway route via Lynx Creek, Dewey, Cherry Creek Hill, and the Verde Valley. That route is 62 miles in length --- the new one is 32 miles."

"There remains some 4 or 5 miles of construction yet to be completed on the Prescott end but access to the remaining portion of the highway is had over local roads while the finishing touches are being made to the permanent road into Prescott. Some surfacing will also be required to make the new highway a finished mountain boulevard but with plenty of state equipment on hand this work is now under way now that the heavy construction has been completed."

"The new route is replete with scenic attractions. Traversing the beautiful Granite Dells region and crossing the broad expanse of Lonesome Valley, the road winds its way up picturesque Yeager Canyon, crosses Mingus Mountain with its scenic grandeur and then zigzags a descent into Jerome along the precipitous sides of Deception Gulch."

"But all this is of secondary consideration for the Prescott-Jerome Highway was built with the idea of utility rather than that of creating a scenic route for tourists. It was built to serve the Jerome mining district and the Verde Valley, and practically all of the passenger, mail, and express transportation is going over the new highway. On the day of the opening 150 reservations were made for the trip by auto-stage."

"For many years Clarkdale and Jerome have been almost as inaccessible as though located in another state. A glance at a map will show the circuitous routes by rail, routes which made it almost an all day's travel from Prescott to Jerome. Recently the Arizona Corporation Commission signed an order permitting one of these lines to be junked, leaving only the more round about of the two routes to be used for rail transportation."

"The Prescott-Jerome Highway was started shortly before the election in 1918 but little was accomplished until the beginning of Governor Campbell's administration, and then the dirt began to fly and with the exception of wet weather it has been flying ever since. Governor Campbell is a former resident of Jerome and Prescott and understanding deeply the necessity for this road as a prime factor in the development of Yavapai County and the state, has done everything possible to advance construction."

"The construction was placed under the direction of E. A. Wolfe, a former division engineer of the State Highway Department, upon his return from overseas service, and he was ably assisted by W. J. Jamison as locating engineer and Engineers Piper and Davis of the department."

"The construction represents the heaviest attempted to date by the Arizona Highway Department. Some idea of the engineering problems can be had" by traveling the first "2 miles out of Jerome up Deception Gulch. This portion of the road was contracted to the Miller Construction Company, of San Bernardino, for $150,000 or at the rate of $65,000 per mile."

"Good progress was made during the summer and fall of 1919 but the work slowed down during the following winter and spring owing to unusually heavy rains and snow. Even in the face of these obstacles, however, work was continued throughout the winter until open weather arrived when efforts and forces were doubled to make up for lost time."

"With the exception of approximately one-fourth mile which was finished by Contractor Galbraith, the remainder of the work has been done by state forces on the day labor plan, this being necessary because of the inability to secure contractors to bid on this class of construction, although it was advertised many times."

"The highway was originally surveyed by Earl Parker under Jack Yeager, chairman of the Yavapai County Supervisors, himself an engineer. When the work was taken over by the state this survey was changed to some extent by Engineer Wolfe. The route was shortened to some extent and all of the ten per cent grades were reduced to the state standard and represents one of the cleverest locations which have ever been figured in this state. For miles the road runs on an even six per cent grade, which means that the incline is gradual with no dips or raises, and that when surfaced the entire trip can be made in high gear, with the possible exception of two switchback curves on the Deception Gulch grade which were put in to develop elevation."

"Care has been taken in the construction of these turns to make them as safe as possible, and to this end obstructions to the view have been removed, thus providing good vision to the driver in rounding those two sharp curves."

"Incidentally the construction of the Prescott-Jerome Highway affords an interesting commentary on the advancement of civilization in Arizona. A half century ago in this same district the Apache Indians were bent on bloodshed and plunder as a means to stem the advance of civilization, as every pioneer remembers. ... Today the Apache descendants are content to aid civilization and progress by assisting in the building of roads. More than 50% of the road forces were composed of Apaches and they have proven highly satisfactory."