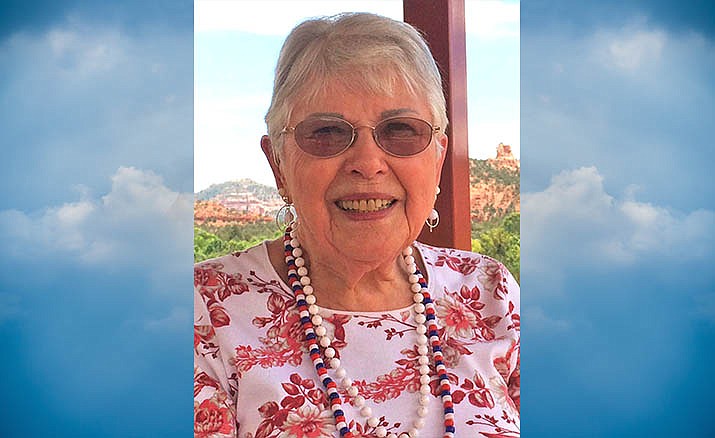 Born in La Habra, California on November 15, 1925, Viola Darden Tschann Lawrence was 4th of 5 children. She graduated from Anaheim High School. She began working at 13 as a live-in nanny to pay her own way. After graduating Viola attended Criss Business College in Anaheim and was soon employed in various accounting positions in the Anaheim area.

She met her first husband, Paul Tschann in 1939 while taking out the trash. They married in March of 1944. After WWII ended, they lived in post-war housing (including a converted chicken coop) until they bought a home in 1948 in Anaheim near where Disneyland was later built.

In 1962 they moved to Garden Grove. Together they had 4 children and were a loving family until Paul’s death in 1983. During the 70’s, Vi found a talent for arranging preserved flowers and had her own business selling her beautiful creations. After Paul’s passing she returned to working full time.

In 1988, Vi married Robert Lawrence whom she met square-dancing. Soon they both retired and began wholesaling Native American jewelry to Boot Barn and other stores. They bought an RV and had a ball! One of their favorite places to stay was Florence, Oregon, a nice change from their home in Perris and later Hemet, Calif. They enjoyed travels and adventures until Robert’s death in 2002.

Vi had a busy social life in Hemet and especially enjoyed her Red Hat group. Eventually a neighbor offered to teach her shuffleboard and he became her 3rd and final love.

Settling in at Sunwest, a retirement community in Hemet they loved, laughed, traveled and held hands as often as possible. They made a beautiful couple riding in Les’s white Camaro convertible, white hair blowing in the wind. But Les passed in 2011. After that Vi said that she had loved 3 wonderful men and she wasn’t looking for #4.

In 2014, Vi moved to Cottonwood Village in Arizona, to be closer to her daughter and son-in-law, Terry and Paul Skelton. She loved living there and made many friends. At 94, she enjoyed playing games and often bested people in their 70’s and 80’s.

Sadly age caught up with her in 2020 and she became too weak to live alone, moving in with Terry and Paul in June of 2020. She passed peacefully on September 9, 2020 of what she called “too many cracks in my heart from all the people I’ve lost.”

Vi was a beautiful woman inside and out. Strong and determined, she overcame many obstacles and sorrows. She tried to never do anything to harm another soul.

She was always dressed to the 9’s and totally coordinated. Her jewelry collection (fine or costume, it made no difference) filled drawers and boxes, hung on walls and backs of doors.

She was elegant and classy, and always humble. She loved people and was loved by so many. Her sweet nature, gratitude for any kindness and her sense of humor remained until the end.

Vi was preceded in death by her parents, her husbands, Paul Tschann and Robert Lawrence and her fiancé, Les Laymon, her children, Patricia May Tschann and Frank Joseph Tschann, and all of her siblings. She often wondered why she was the one who outlived so many.

She adored her 7 great-grandchildren, George Doerfler, Eva Doerfler, Lea Tschann, Ryan Tschann, Sidney Tschann, Zelda Cudog and Ari Tschann. She is survived by nieces, Vicki Baxter, Dotty Woods and Brenda Spires, among others and her partner-in-crime Kathy Leibovich and her husband, Robert Leibovich and her 3 best friends in Hemet, Lorene, Betty and Jackie and many friends at Cottonwood Village.

The family is exceedingly grateful to Northern Arizona Healthcare Hospice, all the nurses (especially Stacey and Claudia), Eddie, Chris, Grace and Laurel. And many, many thanks to Peggy Sing, who took us all into her heart.

Bueler Funeral Home is in charge of her cremation, as she requested. Please share your condolences at www.buelerfuneralhome.com. No services or memorials are planned at this time. If you would like to remember Viola in a meaningful way, you might plant a rose bush or smell a rose; adopt a kitty or pet one; eat a giant hamburger or buy one for a street person; donate to a children’s charity or Verde Valley Sanctuary; buy a bird feeder or maybe 2.