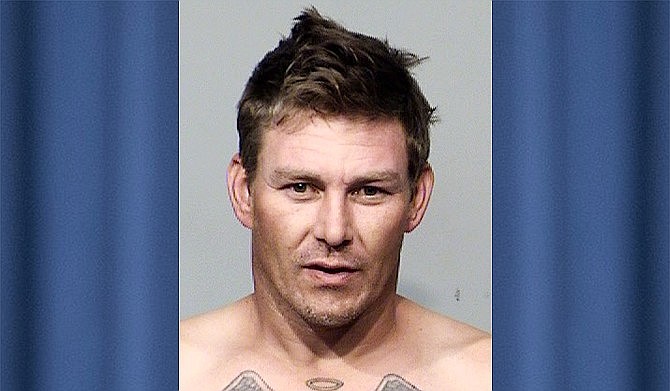 Adam Lee James Ellis was charged with felony aggravated assault upon an officer and a misdemeanor charge of obstruction of a highway/public thoroughfare. (YCSO/Courtesy)

The suspect, identified as Adam Lee James Ellis, was charged with felony aggravated assault upon an officer and a misdemeanor charge of obstruction of a highway/public thoroughfare.

He was transported to the Yavapai County jail in Camp Verde.

Police received reports that a shirtless man was dancing in the intersection of North Navajo Drive and East Superstition Drive, the release said.

At one point, the man identified as Ellis was seen chasing a car, the police said.

Police officers spotted Ellis who then started running southbound on North Navajo Drive before then heading north into traffic, the release stated.

Ellis was perceived to be “in an altered state of mind,” the police said.

At one point, Ellis darted in front of the moving patrol car, forcing the officer to brake to avoid hitting him, the release stated. The officer then moved away from the man and blocked the roadway with his patrol car.

As the officer approached the man, he instructed Ellis to “relax” and that he was just there to help, the release stated.

Rather than heed the officer’ advice, Ellis instead raced forward and hit the officer in the right ear with a closed left fist, injuring him. At that point, the officer unholstered his Taser, but was not required to use it as the man obeyed other officers’ verbal orders to lay down on the ground.

Upon handcuffing Ellis, the arresting officers did find a 2-inch fixed blade wrapped in fabric that he was previously holding in his hand, the release said.

Firefighters with Central Arizona Fire and Medical Authority (CAFMA) treated the injured officer at the scene.