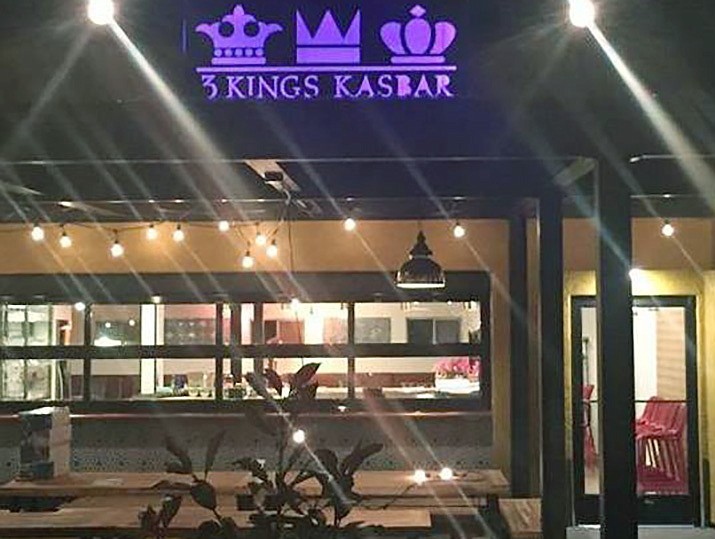 Just before 8 p.m. on Sept. 19, Cottonwood firefighters and police were called to 3 Kings Kasbar, 102 E. Pima Street, for a report of a noxious odor. Nothing was located or identified as the cause of the irritation, burning and coughing that was reported. VVN file photo

COTTONWOOD – Friday, the Cottonwood Police Department sent out a detailed news release about a Sept. 19 emergency about an Old Town restaurant and bar.

Just before 8 p.m. on Sept. 19, Cottonwood firefighters and police were called to 3 Kings Kasbar, 102 E. Pima Street, for a report of a noxious odor. Upon arriving, they initially didn't detect or locate any smell.

Customers who were sitting in the patio area of the restaurant reported their eyes were irritated and burning. Some were coughing, the release states.

An employee at the restaurant pointed to a house across the street and believed that was the source of the odor. Officers responded to that house

People were outside on their porch. They told police they were experiencing the same symptoms as the 3 Kings Kasbar patrons.

Officers didn't smell anything in the house. One officer coughed. Another noted he could feel burning in his sinuses and nose.

One officer on scene likened his symptoms to the reaction to mace or pepper spray.

The house has a window air-conditioning unit. A firefighter conducted an air quality test inside the home, but the substance was had completely dissipated. Nothing registered on a monitor.

A cleaning crew was working on a vent to a kitchen at a nearby restaurant. That crew told police they weren’t using chemicals — only using high-pressure water.

Officers spoke with staff and customers. Neither police nor firefighters could identify the substance

The first-responders could also not recognize the origin.

The only customers affected were the on the patio. There was no indication anyone inside of the restaurant experienced any discomfort or similar symptoms.

Cottonwood Fire and Medical offered treatment and transportation to a hospital. Everyone on scene declined.

In the days that followed, social media posts referred to a specific incidnet. A man who had been denied entry to 3 Kings Kasbar because he refused to wear a face covering. That man left the premises.

The Verde Independent was contacted about this incident as well.

Officers who responded to 3 Kings Kasbar on Sept. 19 indicated they had not made aware of this incident. They were also not aware of staff’s suspicion that this person might be of interest.

The Cottonwood Police Department was only made aware of this concern after those social media posts, the release said.

Cottonwood police then investigated. They identified the man who left the premisis. They also indicated another investigative lead.

Those people were interviewed and denied any involvement in the incident. They told police they were not in the vicinity of 3 Kings Kasbar when the incident occurred, the release states.

“We cannot say with certainty what was the cause, nor can we prove it was done maliciously or who may have caused it,” Cottonwood police said in the release.

The Cottonwood Police Department asks anyone who has information related to the incident to call 928-649-1397. Callers can remain anonymous.