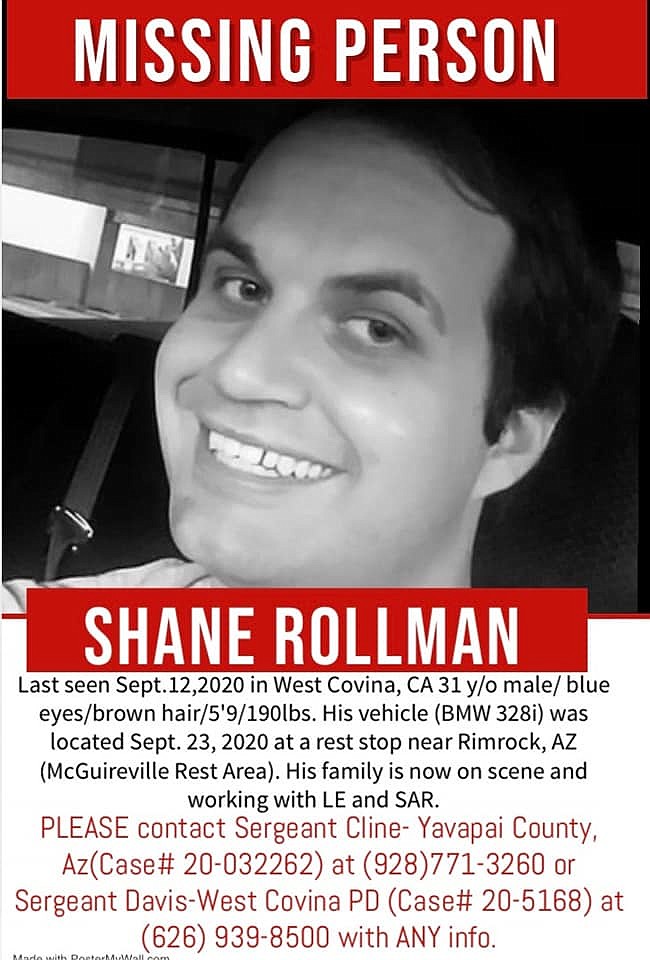 Shane Rollman, 31, shopped at Bashas’ supermarket in Camp Verde and fueled up at a Chevron gas station Sept. 13. He hasn’t been seen or heard from since.

CAMP VERDE – Steven Rollman said his son has had a lot on his mind this past year. But none of his son’s struggles explained why he suddenly drove to Arizona two weeks ago.

Shane Rollman, 31, shopped at Bashas’ supermarket in Camp Verde and fueled up a Chevron gas station Sept. 13. He hasn’t been seen or heard from since.

His car was found at the southbound McGuireville rest area along I-17 on Thursday, Sept. 24. Rollman’s phone and computer were in the car. The Rollmans live in West Covina, Calif., east of Los Angeles.

“Shane had both his grandmothers pass away, his mom almost died, and we started dealing with shutdowns and people dying of COVID-19, all this year,” Steven Rollman said. “Shane had been depressed, and he never handled that kind of grief.”

Steven Rollman said residents of Camp Verde and other Verde Valley communities have been extremely helpful in trying to help locate Shane. He and his wife, Sherry, came to the Verde Valley last week to meet with first responders.

“The community has been very warm and helpful to us, but we don’t really know much to tell them about where they can help look for our son,” Steven Rollman said.

Steven Rollman said in August, his son suffered from heatstroke after his car broke down in Indio, Calif, more than 100 miles from home. His dog was with him. The dog died while he was waiting for roadside assistance.

Steven Rollman said his son was living in his late grandmother’s home. Shane had purchased a new refrigerator about one week before he disappeared.

“Things were starting to smooth out for him,” Steven Rollman said. “The day he left, we were over at the house he lives in, and he said he wanted to take a nap. But by 6 p.m., he and his car we gone.”

Shane Rollman didn’t take a suitcase with him to Arizona, his father said. He also didn’t pack up any personal effects.

Steven Rollman said his son was captured on video at Bashas’, but that was the last place he was seen. His son also took out $700 in cash.

His phone showed a ping at 6:30 a.m., Monday, Sept. 14, that T-Mobile initially told him was in the West Covina area, but his parents learned one week later that the ping came from Arizona.

Where his son went between Sept. 14 and the afternoon of Sept. 24 — when his BMW 328i was found — is unclear. The gas tank was empty and his computer and phone were in the car.

Law enforcement determined the car was brought to the McGuireville rest area sometime after 8 a.m. Sept. 24 and found that afternoon, Steven Rollman said. It was parked in the first possible parking place one could choose upon entering the rest area parking lot.

Steven Rollman thinks the car might have run out of gas. He said it wasn’t clear to him yet if video surveillance determined who parked the car at the rest area.

Shane Rollman’s debit card is with him, but has not been used since Sept. 13.

“It was clean inside,” Steven Rollman said. “There was the ice cream cup from Bashas’ and a water bottle from Love’s (Travel Stop, the nearest location being in Williams), but not the kind of trash or things you’d expect to see if someone were traveling.”

Steven Rollman said his son might have hitched a ride at the rest area. His mother, Sherry, said Shane is not experienced in camping or hiking.

Searches have been done by helicopter, infrared technology, horseback and off-road vehicle. Nothing has been found. Steven Rollman said Shane hadn’t been able to continue his job selling Samsung products, due to COVID-19 shutdowns.

He had been a top producer with that company. Shane had performed eulogies for friends who had lost loved ones to COVID-19.

“I sure hope we find him safe.” his father said.