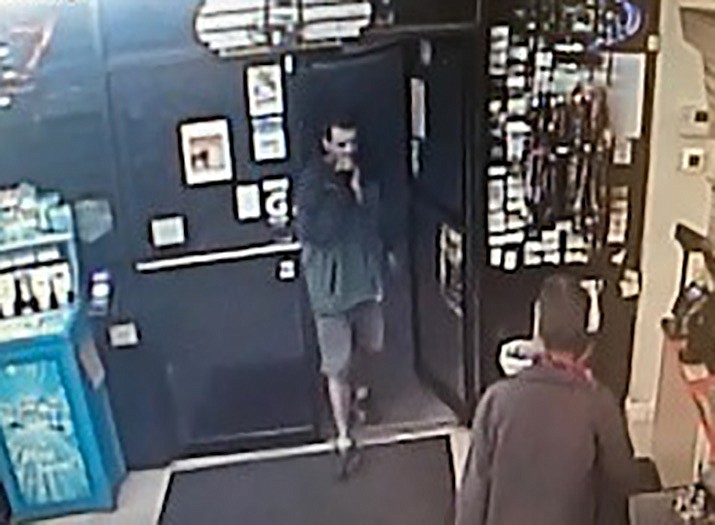 This security camera video still shows the man who allegedly attempted to pass a counterfeit $100 bill at a store in Clarkdale on Friday, Sept. 25. Courtesy of Clarkdale Police Department

CLARKDALE – Clarkdale police are requesting the public’s help in identifying a man who allegedly attempted to pass a counterfeit $100 bill, according to a news release.

The attempt happened Sept. 25 at #1 Foods convenience store and gas station in Clarkdale, at the intersection of State Route 89A and Clarkdale Parkway.

The man was described by a store employee and eyewitness as a white male, the release states. He appears to be between 40 to 50 years old. He is about 6-feet tall with a thin build and brown medium-length shaggy hair.

The man was wearing a green and black jacket, gray shorts, and gray and black shoes, police said.

When the $100 bill was rejected as fake by the store employee, the suspect took the bill and left the store. He got into the passenger side of a green older-model Chevy pickup, which left along State Route 89A in the direction of Cottonwood, the news release said.

Anyone with information about this incident or the suspect is asked to contact Clarkdale police by calling 24-hour dispatch at 928-634-2921, emailing police@clarkdale.az.gov, or messaging the department on Facebook.

The Yavapai County Sheriff’s Office is investigating other instances of counterfeit bills, and Cottonwood police recently made an arrest on a counterfeit charge. Information from the public could be useful to those investigations.

Clarkdale Police Sgt. Joe Candelaria said as of Sept. 29, police are uncertain if the cases in the area are connected.