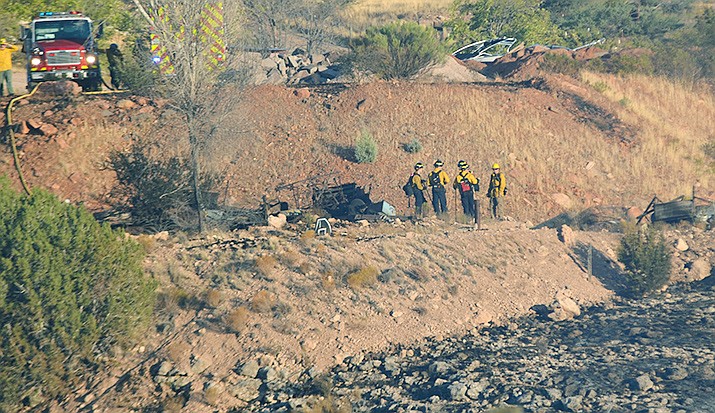 On Sept. 25, at about 1:30 p.m., Copper Canyon Fire & Medical District and U.S. Forest Service responded to I-17 northbound, at milepost 294, for a brush fire on the east side of the highway.

Crews found a small brush fire burning along the highway, extending toward Beaver Creek below. Crews attempted to confine the fire, but high winds coming out of the south of the fire caused it to jump across the creek and move rapidly uphill, toward Rimrock Airpark.

The Yavapai County Sherriff’s Office, Department of Public Safety and Yavapai Jeep Posse began evacuating the immediate area around the fire. An evacuation center was set up at Beaver Creek Elementary School.

Crews began to reposition in and around the homes off Camino Vista Drive. With the assistance of Forest Service, Arizona State Lands, the Verde Valley and Sedona fire districts, multiple air resources and community support, crews were able to contain the fire at 124 acres.

There was no loss of any complete structures. There were no injuries to firefighters or residents.

APS de-energized power lines in the fire area. Once forward progress of the fire was stopped, APS turned the power back on and the evacuation orders were lifted.

Crews remained in the area on Saturday to check for hot spots. No apparent or possible cause was mentioned in the recap.

Copper Canyon reminds residents to ensure a defensible space around their homes by removing dry and dead vegetation. Information about home fire prevention can be learned by calling the fire district at 928-567-9401.