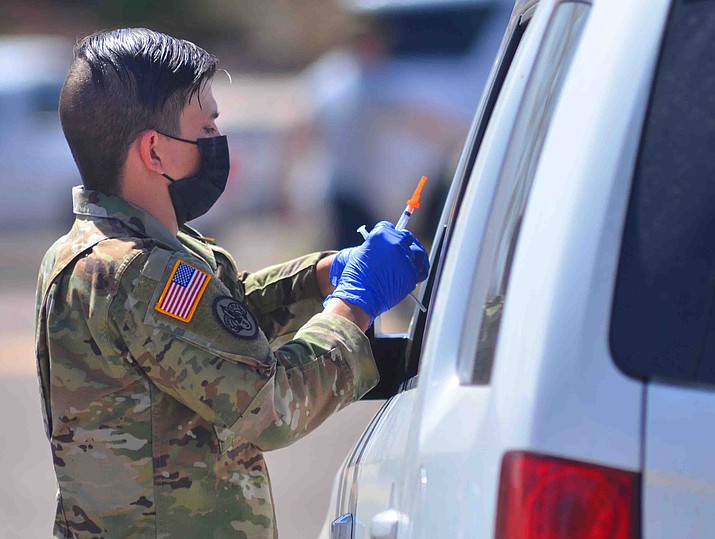 Motorists pulled up for a vaccination drive at the Cliff Castle Casino Hotel Tuesday. The event was a partnership between the Yavapai-Apache Nation and the Arizona National Guard. VVN/Vyto Starinskas

CAMP VERDE - About two dozen members of the Arizona National Guard partnered with volunteers from the Cliff Castle Casino Hotel and the Yavapai-Apache Nation for an outdoor COVID vaccine event Tuesday.

“We had a great event,” said Cliff Castle Casino spokesman James Perry. “Our final number of vaccines given was 588.”

The free Moderna vaccination drive was an arrangement between the Yavapai-Apache Nation and Arizona National Guard.

The event was open to the public. Many people drove up from Phoenix, explained Perry. The Camp Verde vaccination clinic was promoted on the az.gov government site.

A lot of people couldn’t find an appointment in Phoenix so they came up to Camp Verde.

“The more people that are vaccinated in the state, the better,” Perry said.

“Come up here and have lunch and play a little bit.”

The Yavapai-Apache Nation has been providing COVID-19 vaccinations to its tribal members, as well as Cliff Castle Casino Hotel employees and their families for the past month or two, Perry said.

Some Nation members drove through and got shots Tuesday, Perry said, as well as residents from other parts of the community. “We’re really happy with the turnout."

Perry said the casino is almost fully opened but is still operating at reduced capacity.

Facemasks and temperature-checks are still required, he said. “So we’re really taking this very seriously.”

“The Yavapai-Apache Nation is very proud to partner with the Arizona National Guard to provide these much-needed vaccinations to our community,” the Nation stated in its March 30 media release. “We’re fortunate to contribute to helping to end this pandemic.”