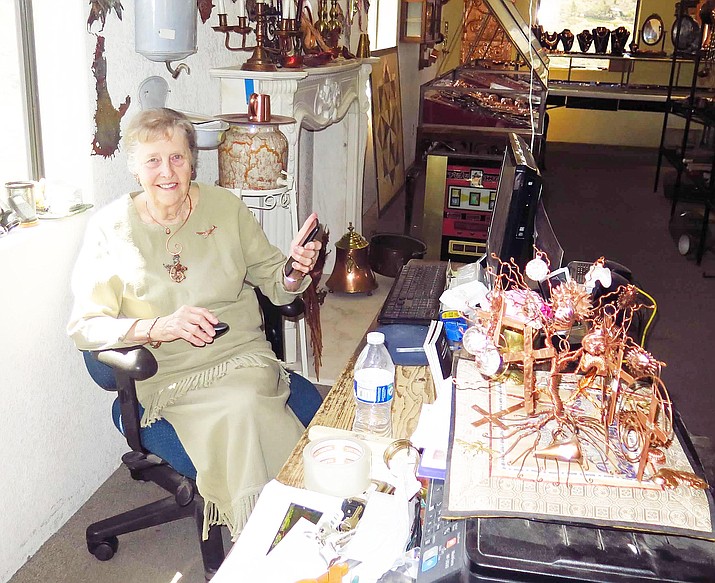 Patricia Annette Meinke, owner of the Copper Shop in Jerome, a founding director of the Arizona Copper Art Museum, beloved mother, grandmother, great- grandmother, aunt and friend to many, passed away suddenly on Sunday, March 28, 2021.

Patricia was born on March 25th, 1933 in North Platte, Nebraska to Edwin and Teresa Hughes. She grew up in Park Rapids, Minnesota, where she met her high school sweetheart John (Bucky) Meinke.

They were married in Temple, Texas in 1952, where Bucky began his 21-year career in the U.S. Army.

Patricia followed Bucky’s duty assignments around the U.S. and spent eight years with him in Germany.

During the late 1950s, Patricia developed an interest in antiques with a heavy focus on copperware. The very first piece she acquired was a copper cake mold, and it became the initial piece of an extensive copper collection.

As of the early 1970s, she and Bucky settled to Olivia, Minnesota and parlayed her copper art expertise into a business, attending hundreds of antique shows throughout the Midwest cities of Chicago, Minneapolis, St Louis, Dallas, Denver, Jackson Hole, Sun Valley Idaho, Sioux Falls, and Tulsa.

Pat loved to travel and spent many summers taking her American friends on visits with her German friends, showing them the sites of Europe. On these trips she always made sure to visit local antique shops and flea markets to add more unique items to her copper collection.

Eventually, Pat opened the Copper Shop in Jerome, Arizona, in 2004.

While still living in Olivia, MN, at that time she worked winters as a snowbird in her beloved shop. During this time plans for a museum, showcasing copper and its impact on history, culminated in the 2012 opening of the Arizona Copper Art Museum in the former High School of Clarkdale, Arizona, where her amazing copper collection resides in perpetuity.

In 2016, Patricia moved permanently to Clarkdale, and she worked in her beloved Copper Shop in Jerome every day until her 88th birthday.

Patricia is also lovingly remembered by her nieces, nephews, and many dear friends.