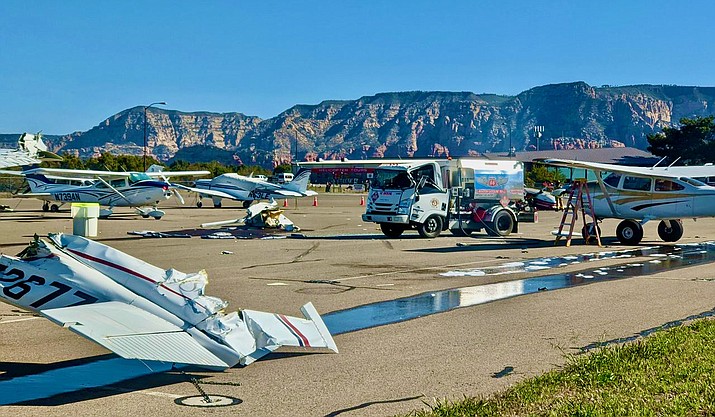 Two people were taken to area hospitals after a small plane crashed Sunday morning at the Sedona Airport, according to the Sedona Fire District. Courtesy of Sedona Fire

SEDONA —Sedona Fire District crews responded to a crash of a small plane at Sedona Airport on Sunday morning, according to a news release.

The release said crews from Stations 1 and 4 were called to the Sedona airport for a plane crash at about 8:20 a.m. Sunday. Upon arrival, crews found a small plane upside down in the tarmac area with three occupants already out of the aircraft and waiting for first-responders in the terminal.

The district’s battalion chief for logistics, David Cochrane, said that apparently, the plane was landing when it left the runway, struck a plane that was tied down on the tarmac, continued on to strike the fuel truck that was about to fuel another waiting plane before coming to rest upside down in the tarmac area.

The release said the plane had three occupants. Two were treated and taken to a hospital with non-life-threatening injuries. The third occupant wasn’t injured.

“Airport authorities we actually out servicing the other planes when the incident happened and could likely provide a firsthand account of the incident,” Cochrane said.

Cochrane said a preliminary check of SFD numbers shows that this was the fourth incident Sedona Fire had been called to the airport for an incident that involved an aircraft, within the past 12 months.

The airport runway closed for a short time before re-opening.

About an hour before crews cleared the scene, Sedona Fire repeated a National Weather Service wind advisory for most of northern Arizona. Even stronger winds of 30 to 40 mph are expected Monday. 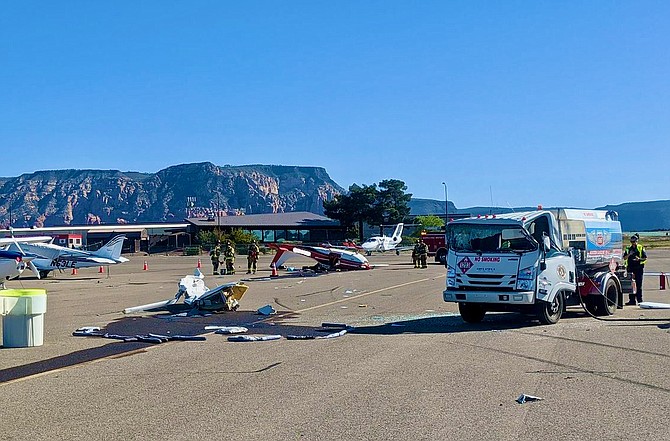