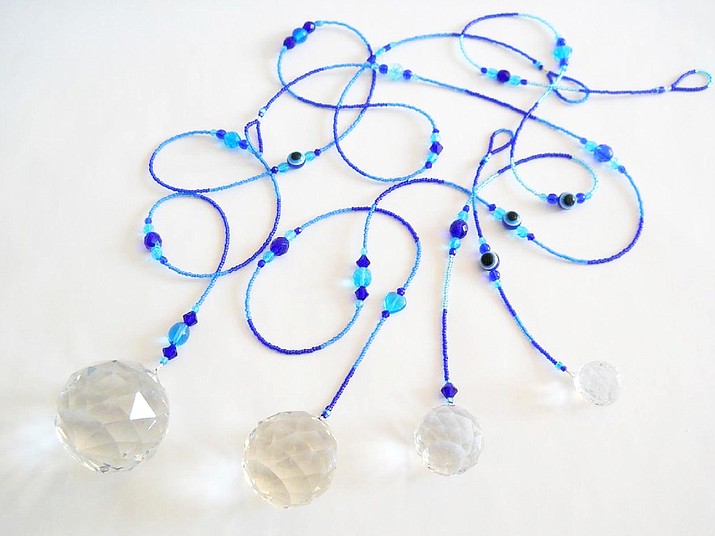 Originally from Northampton, Massachusetts, Judith Beals ultimately left her career as an English teacher to pursue her first love – art.

The Village Gallery of Local Artists will present glass and crystal artist Judith Beals – as its featured artist for May.

Beals is originally from Northampton, Massachusetts, where she lived and taught school. She ultimately left her career as an English teacher to pursue her first love – art.

She opened a stained glass studio and gift gallery in 1979 where she taught classes and participated in numerous Arts and Crafts shows in the Boston-Cape Cod area.

She subsequently opened a second studio in Connecticut.

Since moving to Sedona in 1990, Beals has made numerous contributions to the local art scene; she has worked in several galleries and jewelry stores; taught stained glass at the Sedona Arts Center, participated in establishing a co-op at Hillside, and fashioned many stained glass windows in the area for builders, private homes and businesses. Examples of her windows can be seen at Coffee Pot Restaurant and the Desert Quail Inn.

Beals views Sedona as a magical place that calls many to live among the beautiful, vibrant red rocks.

It is a very spiritual place on Earth as even early Native Americans were drawn here for ceremonies and spiritual endeavors.

The crystal suncatchers have been her passion since 1999 when she first fashioned and started crafting them. The simple designs have an elegance that has caught the attention of many.

Beals loves how they catch the light and throw rainbows into a room.

“There is a lot of darkness in this world and I’ve always wanted to share light with others,” she said.

Beals creates with Czech and Swarovski beads “The difference between a recently made suncatcher and one that has been charged at an energy spot can be felt immediately. The crystals love the energy and sparkle in a special way while being cleared and infused with Sedona Light,” Beals states. ”Art has always played a big part in my life.”

She works with watercolors and acrylics and is also a writer. In 2019, she published a book, “Messages from Beyond” where she expands on the many messages she has received over a 45-year period.

The gallery is located at 6512 State Route 179 in the Village of Oak Creek at the Cortez roundabout.