ADHS director: Doctors can administer COVID-19 shots to their patients 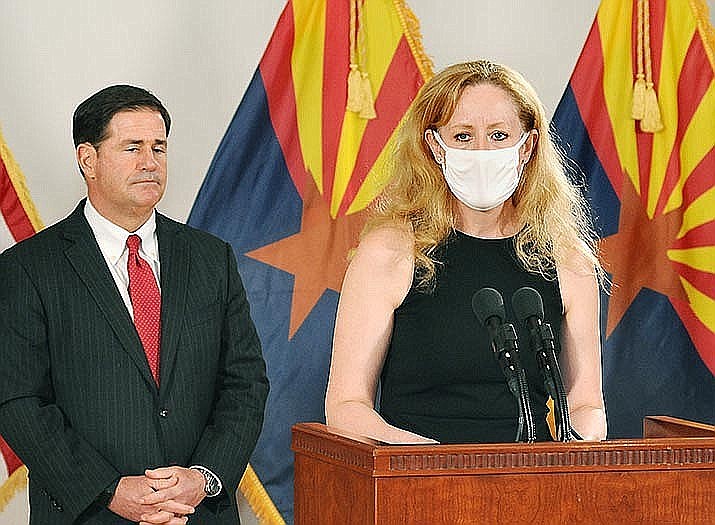 With the number of vaccine doses being administered dropping, state health officials are finally agreeing to let doctors start immunizing their patients against COVID-19. The move comes as Dr. Cara Christ, director of the state Department of Health Services, acknowledged that the number of doses being administered at state-run sites has been dropping. Howard Fischer / Capitol Media Services file photo

PHOENIX - With the number of vaccine doses being administered dropping, state health officials are finally agreeing to let doctors start immunizing their patients against COVID-19.

The change, which will be effective Monday, means that nearly 1,200 physicians who have set up procedures and register with the state now can directly receive the Moderna vaccine. Each will be able to get up to 200 doses every two weeks.

More than 100,000 doses are expected to be available for direct ordering this coming week.

But the only vaccine option at this point for those going to a physician will be that one from Moderna whose storage requirements are less stringent than that of the Pfizer vaccine which requires ultra-cold storage. Moderna also can be distributed in smaller lot sizes.

The move comes as Dr. Cara Christ, director of the state Department of Health Services, acknowledged that the number of doses being administered at state-run sites has been dropping.

On April 29, for example, the state says only about 9,100 doses were administered. That compares with nearly 25,000 at the beginning of the month when it reached its peak.

At the same time, though, the number of people still contracting the virus actually is increasing. Current figures put daily infection rates at where they were last September and October, before there was a vaccine.

In fact, Christ also warned that the state could be in for yet another surge in infections.

But she said that should not result in the same crush on hospital beds as last year, as those who are inoculated tend to get less severe infections.

As of Friday, however, just 2.27 million Arizonans had been fully immunized.

That's fewer than 32%, though that figure includes the total state population. And for the moment, the vaccines have not been approved for anyone younger than 16.

The move away from massive vaccination sites is a reversal of the policy of the state since December. That's when Gov. Doug Ducey signed an executive order banning private vaccine distribution without approval of the state health department.

That order, issued even before the state had its first allocation, even allowed the health department to seize any vaccine allocation made to anyone else.

"It's been a really successful for quickly vaccinating individuals,'' Christ said. But she said it always was the intent to eventually move away from mass-vaccination sites, whether run by the state or by counties.

"Those that were very motivated to get the vaccine were going to do whatever was needed, even if that was driving to Glendale at 3 a.m. in the morning, to get that vaccine,'' she said. "We knew that was kind of our low-hanging fruit in Arizona.''

Now, Christ said, there are still some people out there willing to get the vaccine but may simply be busy.

"And now we have to make it more convenient, more in the areas where they live, work and play, at their grocery stores, at their pharmacies,'' she said, all of which have been offering vaccines now for weeks. And beginning this coming week, that will include doctors.

Christ said she believes that will make a big difference in the state's efforts to get as many people vaccinated as possible.

It goes beyond the the convenience factor of people being able to get the vaccine when they stop by for their annual checkup. What is key, said Christ, is being able to get immediate -- and trusted -- answers about things like the risks and benefits.

It use was paused by the Centers for Disease Control following reports of some people getting blood clots. While CDC now has again clear it for use, Christ said the reports could make people hesitant to get inoculated, especially if that is the only vaccine available.

Doctors, she said, can put that in perspective.

"I would advise a patient of mine, 'You're at higher risk for getting blood clots if you get COVID-19 than you are from getting a blood clot from this vaccine,' '' Christ said.

"Hearing those types of facts from your health care provider who is actively encouraging you to get vaccinated, and, by the way, we have the vaccine, we just go in the next room and get it, could be a major driver for getting some of those that just want more information about the vaccine,'' she said. "I think that would be a big help.''"

Christ, who falls into that age group of women age 18 to 49 who appear at highest risk of blood clots from the Johnson & Johnson vaccine, said she would get it if she had not already been inoculated.

All this comes as the state continues to struggle to reach "herd immunity,'' the point at which a sufficient number of Arizonans are vaccinated that the virus has a hard time finding a new host. Medical experts put that figure at 70% at minimum.

Vaccine hesitancy aside, there's also the question of vaccinating children. While they appear to get less ill from the virus -- though some mutations seen elsewhere have proven fatal -- they can still carry and transmit the disease.

Christ said she is hoping that Pfizer will have federal approval from the Food and Drug Administration by the middle of the month to start inoculating anyone 12 and older. And that, she said, would open the door to vaccinating anywhere from 320,000 to 400,000.

The health director said she is "hopeful'' that Arizona reaches that herd immunity level by the end of summer or early in the fall. She said the fear of not getting there is why her agency has been working with community organizations to do "pop-up'' clinics as well education campaigns, "especially with variants that could come up.''

"Luckily, the vaccines appear to be working against the variants we see circulating in Arizona,'' Christ said. "But we know that's what viruses do: They mutate.''