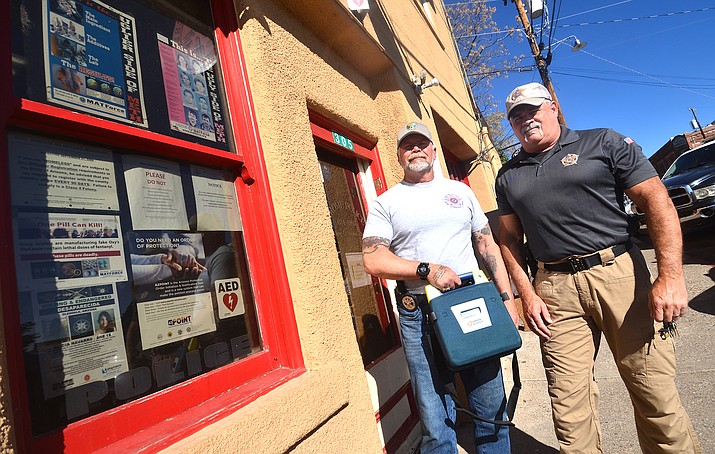 Jerome Police Chief Allen Muma, in grey shirt, and Jerome Officer Kerry Lee are credited with saving the life of a man in cardiac arrest at a local gym Tuesday. VVN/Vyto Starinskas

JEROME - An elderly man in cardiac arrest at a local gym came to life, opened his eyes and gasped for air as Jerome Police Chief Allen Muma was giving him a second set of chest compressions Tuesday.

Out of the dozens of times he had administered CPR, Muma said this was the first time that somebody has come back to life while he was pumping on their chest. “It’s a rare occurrence,” said Muma.

The chief said it’s difficult to describe the experience to anyone that was not there.

“To have somebody come back to life that’s dead,” Muma said. “He was in full cardiac arrest. He was apneic and he had no pulse.”

The stars were aligned for the victim because Muma just happened to be a Planet Fitness on Wednesday as he couldn’t work out at the town’s firehouse because of rope training.

While exercising, Muma heard a “big thud.” He looked over and saw a man collapse on the nearby treadmill.

Muma ran over and let everyone know he was an EMT. He quickly judged that the man was in cardiac arrest. “He was pulse-less and he was not breathing.”

The police chief immediately began chest compressions, but credits the “team effort” by everyone at the scene at the gym for helping save the man’s life by conserving precious minutes.

“This guy’s alive today because of a group of people who were in the right place at the right time that knew what to do,” Muma said.

“He had no pulse and he wasn’t breathing,” Muma said. The only thing that they could do for the patient was “make his heart beat for him. “That meant manually compress his chest. “

“We gave him one shock, started back in doing compressions again,” Muma explained. He was at about count 70 or 80 “and this guy took a big gasp, and his eyes opened up, he came to life.”

There were four or five people who gathered to help the chief treat the person. “We had a good team,” he recalled. “It saved this guy’s life.”

Jerome Officer Kerry Lee, who was working out with Muma at the time, said he dialed 911 and got the Cottonwood Fire Department and Verde Valley Ambulance rolling.

Somebody in the gym quickly brought the Planet Fitness’s Automated External Defibrillator (AED) to Muma, whose EMT equipment was in his truck.

A nurse who was at the gym said she could help Muma if he needed a break from pumping chest compression. Muma felt a number people could have stepped in at the scene.

Muma said the CPR was stopped temporarily to get a reading from the AED, which stated that there was a shockable rhythm.

Muma gave him a shock and he started compressions a second time. “Part way through my cycle of compressions, he regained consciousness. He came back to life,” the chief said.

Cottonwood Fire arrived on the scene and continued the care, Muma said. They got him into the ambulance where he was conversing on the way to the hospital, he added. It was a great “lay-person team response.”

The police chief said this is the message he wants to get out from this incident is that early intervention saves lives and this is a great example.

A press release by the City of Cottonwood stated that the patient’s heart responded appropriately, he started to breathe again on his own and regained consciousness. He was transported to Verde Valley Medical Center for further evaluation and treatment.

Muma said he is an American Heart Association CPR and AED instructor, and he encourages everyone to take a CPR class so people are prepared when something like this happens.

Muma said the pandemic canceled many of the CPR classes in the Verde Valley last year, but many fire departments will begin to schedule them as the pandemic decreases.