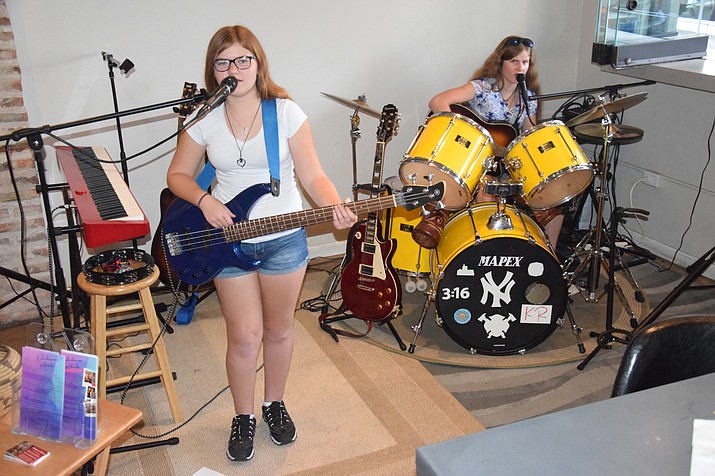 Tivona Moskoff, left, and her sister, Gracie on drums, have been playing live music in the Verde Valley and elsewhere in Arizona the past couple of years. Tivona, age 12, and Gracie, 15, play classic rock, country, folk and pop songs that cover more than 50 years. (Jason W. Brooks/Kudos)

The sounds of their guitars are not meant to excite the way Eddie Van Halen’s power chords and shredding are meant to do.

The two young women playing those guitars — and other instruments — create soothing, calming moods and many other types of powerful vibes with their live musical performances. Gracie Moskoff, 15, and Tivona Moskoff, 12, moved to Sedona in February 2018 and started playing open mics and booking shows at clubs in the Verde Valley.

The musicians started performing when they were living in Ahwatukee after they learned about the afterschool program at School of Rock in 2015.

“We also participated in The Ahwatukee Children’s Theater singing and were acting in plays,” Gracie said. “We continued with Music Maker Workshops, forming our own band and playing in Phoenix.”

The duo, accompanied by their father, Andrew, has been able to secure several one-time and a few recurring shows at venues in the Verde Valley and elsewhere in Arizona. The homeschooled sisters bill themselves as covering more than 50 years of classic rock, country, folk and pop, with an original song on occasion.

Gracie said she and her sister love classic rock — especially from the 1970s.

“We loved classic rock — maybe because that’s what Dad listened to a lot,” Gracie explained. “He exposed us to a wide variety and, as he says, ‘I’m so happy they like my music tastes.”

The sisters do new sets for each show. There are sometimes some repeats that are popular.

“We try to perform our best sounding songs,” Gracie said. “We go through our song lists and decide together. We like to try and keep it fresh and add new songs regularly for us and the audience.”

Tivona said she loves to sing ballads and up-tempo songs. That’s where there are several Billy Joel and Eagles songs on her list of favorites to perform.

Gracie plays several instruments during each show, including guitars, drums and keyboards. The songs she loves to play the most are ones where she is on the drums, such as some favorites by The Who and The Eagles.

With The Eagles being a key part of their repertoire, Hotel California is their agreed-upon favorite to play as their show finale.

The family has a small dog that it prefers not leave at home for too long, so Cave Creek and Flagstaff are about as far as the sisters and Andrew have gone to play at open-mic events. Their monthly gigs are in the Village Of Oak Creek, Sedona and Old Town Cottonwood.

The Moskoffs donate 100% of its show tips when they regularly fundraise for their homeschool-created program, Pets 4 Vets. The program is part of the Sedona Marine Corps League, benefiting the Humane Society of Sedona and providing free adoptions and start-up funds for veterans and active service members.

When it comes to buying instruments and other gear, Gracie said, the sisters are fortunate to have a generous and supportive grandmother who loves their music. Also, she said instruments can be found very affordably if you look carefully.

Gracie has just obtained a Violin and wants to incorporate that into their music. Tivona is learning more keyboard to experiment with different instrument sounds like piano, organ, strings etc.

“We’ve been exploring ‘Celtic punk,’ by bands like Flogging Molly and the Dropkick Murphys,” Gracie said. “They’re fun to play, and sing with lots of spirit.”

Gracie is looking to start in hospitality, as she’s old enough to work part-time now.

She said their music has been well-received most everywhere they play, but because we have a full band setup, not all venues are suitable. They need an indoor or outdoor location with ample space.

Also, by playing louder rock songs, the duo is a centerpiece of a location, rather than providing house music.

“Our sound is pretty robust, so we’re not a background soundtrack,” Gracie said.

Of course, there are some who don’t care for their music or volume, and have made it known on a few occasions, she said.

“We’ve developed a thick skin to handle criticism and rejection and a persistent drive to continue developing our talents,” Gracie said. “After all, we’re only 15 and 12, and have a long road ahead.”

She said the most disappointing experiences have been with some of the decision makers who have no given them a chance.

“At the same time, we’ve been really blessed to work with great bookers, too,” Gracie said. “The Verde Valley and Sedona really have an active and rich music scene.”