Column: Hiking in Arizona during the summer is no joke; be prepared 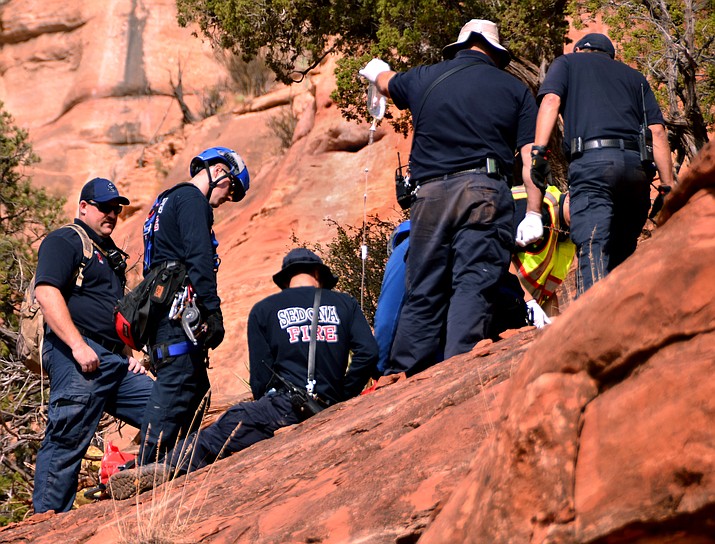 This 2017 file photo shows a rescue of a hiker in Sedona. Hiking can be dangerous in Arizona if a person is not prepared. (Independent file photo)

Having to write news briefs about hikers being found deceased, or alive but needing search and rescue, is never a fun part of the job.

So why do we do it? Mostly, we aim to bring awareness to the dangers of hiking during the summer months in Arizona.

The two 19-year-old males from Phoenix were eventually hoisted out by rescuers using a mechanical rope setup at the top of the canyon by 3 a.m., nearly 10 hours after the two called for help.

Recently, however, another man wasn’t so lucky.

Missing for nearly a month, Prescott native Patrick Higgins was out four-wheeling July 12 with some friends when their vehicle got stuck. The friends hiked out first, with Higgins staying behind until the next morning when he himself attempted to hike out.

No one had seen him since.

On Aug. 7, the Yavapai County Sheriff’s Office (YCSO) search and rescue team responded to a call from some other hikers that a body had been found in the Bannie Mine area near Walker on the outskirts of Prescott.

The YCSO back country search and rescue squad made their way to where Higgins was located, but because the terrain was too difficult, and sunlight fading, they were forced to wait until the next morning.

Three of the search and rescue members actually stayed with Higgins’ body overnight until a DPS helicopter arrived to hoist the body out of the ravine.

“We are all lucky to have such dedicated volunteers and public safety professionals willing to give their time and risk their own safety to make sure Patrick and others are brought home to their families,” Yavapai County Sheriff David Rhodes said after hearing about the rescue.

So what can be done to prevent such tragedy? Or from getting lost in the first place?

There were more than 500 heat-related deaths in 2020, according to the Arizona Department of Health Services, and several were due to hiking.

Obviously, Arizona has some of the best hiking trails in the country. Hiking is a great way to unplug and get in shape (or stay in shape). It can take you away from civilization and off the grid, if that’s your thing.

With that, here’s a list of “10 Essentials” Sgt. Aaron Dick from CCSO recommends in addition to a charged cellphone when taking an Arizona hike:

• Extra clothing … it could rain; add lip balm and sunscreen to this item;

This may seem excessive. In fact, many people probably never need most of these listed items when they’ve gone out on a hike. But, to be safe, hikers should always be prepared.

For more information about hiking in Arizona, visit azstateparks.com/hiking-safety.