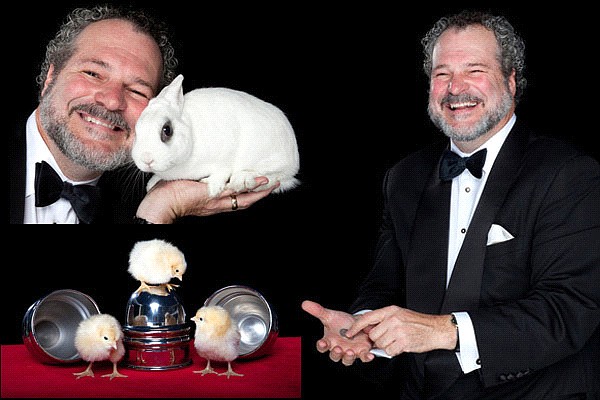 The Sedona International Film Festival partners with Comedy Machine to present “An Evening of Magic and Comedy” on Thursday, Aug. 19, at 7 p.m., according to a news release.

World-acclaimed magician Johnny “Ace” Palmer — named the No. 1 close-up magician in the world — headlines the show. He will be joined by comedians Andy Kern and Steven Briggs.

Johnny “Ace” Palmer specializes in close-up magic. He was voted Best Close-Up Magician at the Magic Castle in Hollywood by the Academy of Magical Arts two years in a row and is the only magician to have received both the International Brotherhood of Magicians’ Gold Cups Award of Excellence and the Society of American Magicians’ Gold Medal Award of Honor.

About.com has compiled a list of 10 best close-up magicians and has put Johnny in the number one position. He has had the honor of being a featured guest on the Late Show with David Letterman, and the Society of American Magicians awarded him a lifetime achievement award for his contribution to close-up magic.

Growing up in the outskirts of Chicago, Andy’s stories will have you spellbound. He dreamed of becoming a professional football player. Once he realized that wasn’t going to happen, he jumped into standup comedy. Andy went from the Chitlin circuit in South Central to Comedy Central, and his star has been rising ever since.

Andy has performed in Comedy Clubs, Colleges, Military Bases, and Casinos from Canada to California. Andy has appeared on VH1 and Comedy Central.

Steven Briggs has a unique, high-energy style of comedy that keeps his audiences on their toes. His amusing anecdotes are enhanced by his use of sound effects, act outs and characters.

Steven has appeared on Netflix, MTV, Hulu, TruTV and most recently HBO’s “Curb Your Enthusiasm.” You have also seen him in commercials for ESPN, Dodge Ram, Toyota, Google, Oscar Mayer, Mountain Dew and Call of Duty. Steven’s debut comedy album can regularly be heard on Sirius XM Radio.

When he is not entertaining audiences across the U.S., Steven is headlining overseas for our troops in Egypt, Kuwait, Iraq, Italy and many more.

It is going to be a great show of magic and laughter. You won’t want to miss it!