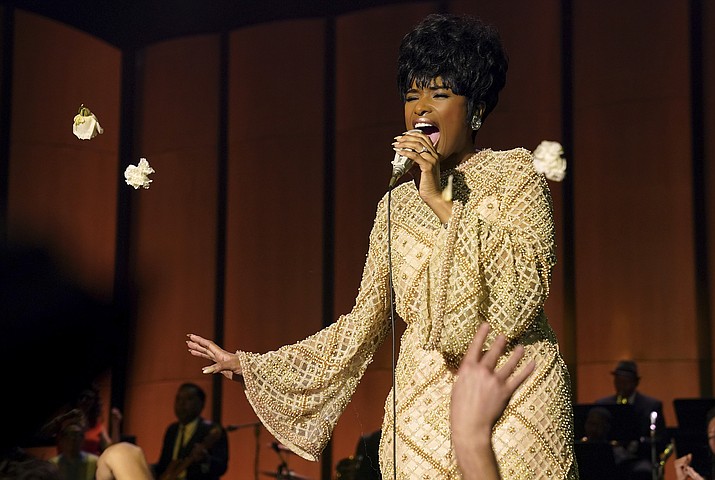 The tag line for the latest biopic about an American icon reads: “Find out what it means.” Good luck with that.

After more than two hours of the new messy Aretha Franklin biopic “Respect,” it’s not clear what it means, wasting a lot of superb screen talent in the slapdash process.

This time it’s Jennifer Hudson portraying the Queen of Soul — a few months after Cynthia Erivo played Franklin in a National Geographic TV series — and you won’t be able to leave the theater without a lot of respect — yes, R-E-S-P-E-C-T — for Hudson’s abilities.

But a meandering, unfocused look at the first three decades of Franklin’s life will also leave you saying a little prayer for the filmmakers. After all, if you come for the queen, you best not miss. This is a miss.

Director Liesl Tommy, using a screenplay by Tracey Scott Wilson, offers a series of chronological vignettes to try to explain what fed Franklin, a preacher’s daughter from Detroit who would light up the world with her voice.

“Music will save your life,” is the Hallmark-like slogan used in the film — uttered by a soulful Tituss Burgess as the Rev. James Cleveland. But that’s not hefty enough to explain how a woman who endured rape, domestic violence, racism, misogyny, mental health challenges and addiction could go on to win 18 Grammys. Music will save your life? That may work for Nickelodeon. You need more here.

The script by Tracey Scott Wilson (“Fosse/Verdon”) is a collection of scenes that don’t add up to much, never really building and interrupted — by necessity, of course — with overly long music sequences. This film needed someone to sharpen and clarify. It needed what Franklin was, an ideal interpreter.

Even Tommy herself seems to get a little bored by the end when she starts fussing with black-and-white film and old lenses, recreating TV interviews and even mixing in real news footage from the ‘60s. She even pops up in her own movie — as a fan seeking reassurance from Franklin — like a fangirl Alfred Hitchcock.

It’s telling that many of the smaller roles pop more than the main event. Mary J. Blige, as a tempestuous, table-tossing Dinah Washington, gives the film an electric kick and Audra McDonald as Franklin’s mother is precious and understated, every second of their screen time leaving you begging for more.

At 6, Franklin endured the separation of her mother — never explicitly said in the film because her dad was sleeping around — and then her mom’s death at 10. The film’s first half hour dwells on these twin calamities, featuring Skye Dakota Turner as a terrific young Aretha and Forest Whitaker as her father, a complex role that mixes warmth and anger but never quite illuminates.

Franklin, who died in 2018, was raped and impregnated as a pre-teen, hit by her father and then hit again by her first husband (a fabulous, equal parts smoldering and vicious, Marlon Wayans.) The queen was both a civil rights icon — standing with the Rev. Martin Luther King, Jr — and a diva-ish drunk who lashed out at friends. How much her abuse led to her addiction is only suggested.

Hudson isn’t afraid to get ugly at rock bottom, though maybe not as harrowing as Andra Day did as Lady Day in “The United States vs. Billie Holiday.” “Respect” doesn’t dwell in the darkest depths like that biopic of another troubled superstar singer.

This film, unsurprisingly, is strongest whenever the music takes over, especially when Hudson opens her mouth and musical sparks fly or when we’re shown Franklin feeling for her own sound, which we are reminded didn’t happen for several albums.

A sequence in an Alabama recording studio when she and her white band are creating “I Never Loved A Man (The Way I Love You)” is tense and excellent, as is when she stumbles into reworking Otis Redding’s “Respect” around a piano with her sisters in their pajamas.

The film ends with Franklin at 29 recording her landmark album “Amazing Grace,” and another 360-degree camera turn around her face. Alas, the film itself has grace but is not really amazing at all.