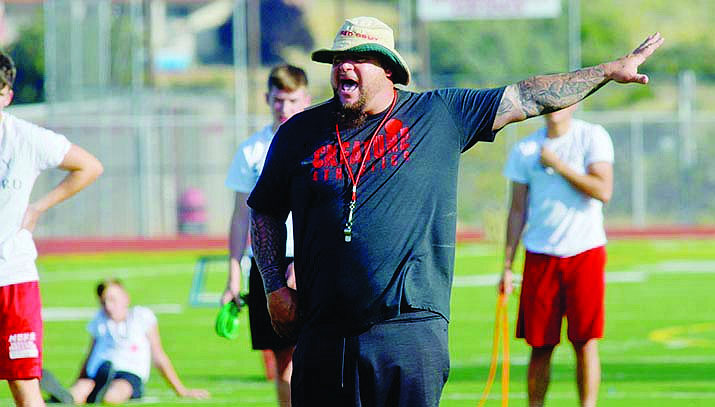 Provenzano, who was hired in the spring of 2020 before COVID-19 hit and forced schools across the state of Arizona to close down, leaves a program that is just over two weeks away from its opener against Thunderbird on Sept. 3.

“I would thank all the special people there, you know who you are. I will always remember you and keep you in my prayers and thoughts,” Provenzano said in a phone interview with the Independent late Wednesday night, adding that between the trips back and forth to the Valley where he lives, he was missing family too much.

“I felt like I was missing too many moments with my daughter. I turned around a couple days ago and she wasn’t a little girl any more, I want to be there for her. … I love her more than anything,” Provenzano said.

DeVore said he doesn’t see a major “upheaval” on the coaching staff.

“We have a lot of good coaches on staff, as far as a major upheaval, the coaches are all still here and they can manage the day-to-day operations,” DeVore told the Independent in a phone interview Wednesday, Aug. 18.

DeVore added that he informed the parents Tuesday night of Provenzano’s decision, and that a search for a head coach will begin quickly.

“We are in the process of figuring out what the future looks like moving forward,” DeVore said.

Mingus went 0-10 during the 2019 season before Provenzano was hired. The Marauders went 1-6 in a COVID-shortened 2020 campaign, his only season at the helm.

Provenzano previously led Barry Goldwater for two years (2017-18) before spending 2019 as an assistant coach at Liberty, which won the 6A title that season.