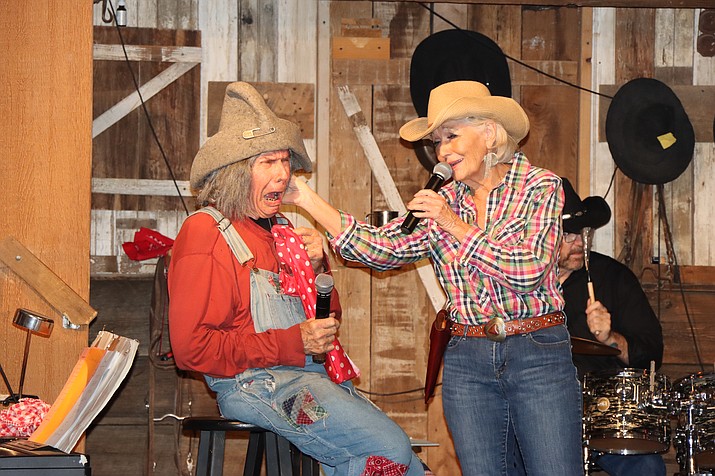 Glass has a background in acting, singing, producing, and directing. He grew up in North Carolina and attended New York University where he was a theater major.

Glass went on to become a teacher for at risk youths in New York City. He is a business owner and entrepreneur who enjoys being a mentor and helping others. He resides in Prescott, where he also runs a party rentals business, Hero Party Rentals. Glass is a leader in his community, and throughout the Verde Valley.

Ranzi was born and raised in northern Italy. Prior to earning a Ph.D in sociology, she worked on cruise ships as an entertainer and a performer.

Ranzi moved to the U.S. to pursue a performance career. After moving to Prescott in 2015, she became a realtor and has enjoyed helping her clients along their home-ownership journey. She is an ambassador for the Prescott Chamber of Commerce and serves on the board of directors for VAREP, a nonprofit real estate advocacy group for veterans.

Glass and Ranzi will be married in Italy next month! They have three children, Nico, 18, Jewels, 16, and Charm, 14. The family resides in Prescott but now spend a lot of their time in Cottonwood working at the Blazin’ M.

Singer and actor, Tom Jepperson, returns as The Blazin’ M’s most eligible bachelor, “Otis.” For the past 15 years, his comedic and singing talents have been so enjoyed at the ranch that he’s being inducted into the Greater Arizona Country Music Association’s Hall of Fame on Sept. 26.

Singer, Charlie Allen, joins the cast and delights the crowd with a line-up of country music favorites, including songs by Dolly Parton, Patsy Cline and more.

The show was written by Glass and Rob White, the show’s MC for the evening.

Popular entertainers and award-winning writers, Dev Ross and Shondra Jepperson (aka The Two Lucys), were brought on board by Glass to develop Blazin’ M’s latest show. Ross served as show director and Jepperson served as music director. Jepperson also helped put together the ranch’s new four-piece band, The Blazin’ M Ramblers, led by the multi-talented Eric Williams on keyboard, guitar, and harmonica!

The show is humorous, fast paced, and great fun for all ages. The Jake & Otis Country Cabaret will run on Wednesday’s, Thursday’s and Saturday’s thru September, and starting in October, it will be performed five nights a week, Tuesdays through Saturday’s.