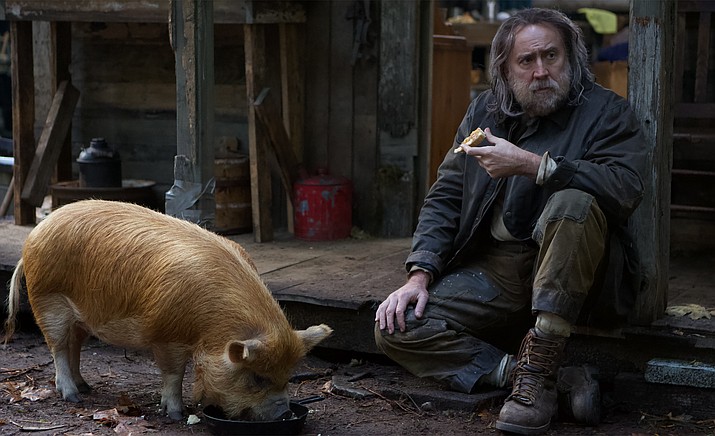 A truffle hunter (Nicolas Cage) who lives alone in the Oregonian wilderness must return to his past in Portland in search of his beloved foraging pig after she is kidnapped. (SIFF/Courtesy)

The Sedona International Film Festival presents the northern Arizona premiere of “Pig” showing Aug. 27-Sept. 2 at the Mary D. Fisher Theatre, according to a new release.

We don’t get a lot of things to really care about. A truffle hunter who lives alone in the Oregonian wilderness must return to his past in Portland in search of his beloved foraging pig after she is kidnapped.

Robin “Rob” Feld (Nicolas Cage) is a former Portland-based chef turned reclusive truffle forager following the death of his wife and partner Lori fifteen years prior. He hunts truffles deep in the forests of Oregon through the use of his prized foraging pig. He begins supplying the truffles he and his pig finds to Amir (Alex Wolff), a young, inexperienced seller. One night, Rob is assaulted by unidentified assailants who also steal his pig.

He reaches out to Amir, who helps him locate a group of junkies who another local truffle-hunter suspects of being the culprits. They claim not to have the pig, but allude that the person who got it from them lives in downtown Portland. Rob and Amir infiltrate an underground fighting ring, where they manage to extract another clue as to the whereabouts of Rob’s pig.

Tickets are $12, or $9 for Film Festival members. For tickets and more information, please call 928-282-1177. Both the theatre and film festival office are located at 2030 W. State Route 89A, in west Sedona. For more information, visit SedonaFilmFestival.org.