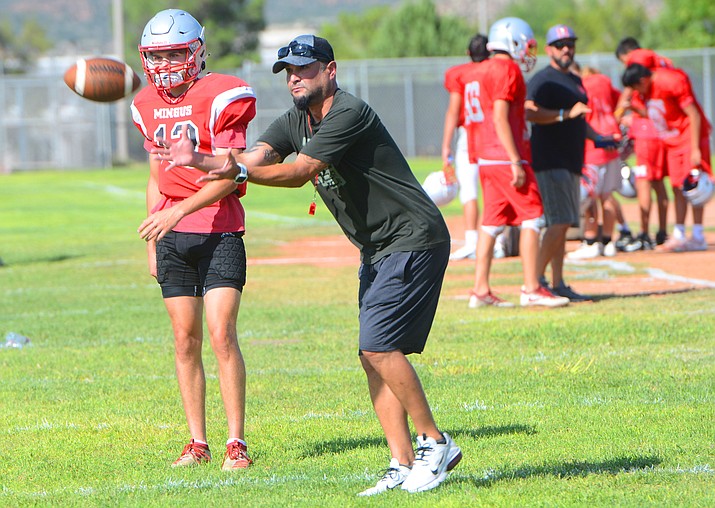 COTTONWOOD — In need of a head football coach after Doug Provenzano resigned his position just three weeks before kickoff of the 2021 campaign, Mingus seems to have found their man.

Dave Moncibaez, a 1997 graduate and former football player for the Marauders, was named interim head coach for Mingus this week.

“In conjunction with the current football staff that have been working hard all summer preparing our athletes, Dave is eager to jump right in and work with them to prepare them for competition,” Mingus Athletic Director Yancey DeVore said in an email statement. “We are excited for what Dave brings to the table for the direction of the program as we move forward.”

Moncibaez, who was the Mingus golf coach before taking the football job, said it’s been a “whirlwind of emotions” this last week.

“I guess the best description would be to say that I am honored to be in this role and look forward to the opportunity of helping this team grow,” Moncibaez said. “This is my hometown football team and the community I grew up in. I was coached by amazing men that were driven, supported us and encouraged us to be our best. We truly have an amazing staff that carries those same principles, and I can’t wait to see where the season takes us.”

Mingus went 1-6 during a COVID-shortened 2020 campaign, and were 0-10 in 2019. The Marauders last made the playoffs in 2018 when the team finished 8-2 overall and won the Grand Canyon region, defeating rival Prescott 12-10 in the season finale to claim the title.

Mingus then went on to beat Bradshaw Mountain 21-17 in the first round of the 4A state playoffs that season, but lost to Salpointe Catholic 62-22 in the state quarterfinals.

Moncibaez, who played for legendary Mingus coach Bob Young in 1995 and 1996, joined the team just two weeks before kicking off the 2021 season against Thunderbird on Sept. 3.

“The coaches have been very supportive of me joining them this season and helping me acclimate,” Moncibaez said. “It is a challenge, but what coach doesn’t like a bit of a challenge?”

Moncibaez aims to bring a hometown team back to its roots.

“I want the coaches and boys to feel supported as we move forward together. My goals are to play some ball, have fun and win some games,” Moncibaez said, adding the current assistant coaches are the foundation of the team this season.

“They have been dedicated to the program and committed to developing the team’s strengths,” Moncibaez said. “As the ‘new kid’ they have been instrumental in guiding me through what has already been established. Our approach is to move forward together as a team and do what’s best for Mingus football and for our players. Right now, we are fine tuning and getting our boys ready for that first kickoff.”