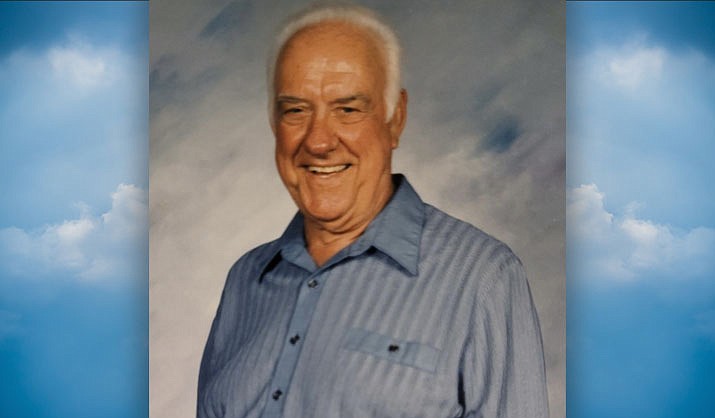 Robert (Bob) Beltz, 96, passed away on July 30, 2021. He leaves behind his loving family, friends, and his beloved Clarkdale, Arizona.

Bob was born in Winfield, Kansas on January 16, 1925 to Carl and Nellie Beltz. His family moved to Clarkdale in 1928. He graduated Clarkdale High School in 1943. He then went on to graduate from the University of Arizona with a bachelor’s degree in business in 1949.

Bob proudly served in the Army Air Force from July 11, 1943 to September 9, 1945, during World War II. He served as a 1st Lieutenant in the 457th Bomb Group; 450th Squadron; stationed at Glatton Station, England. He flew as a Navigator on the “B-17 Flying Fortress” and flew 26 combat missions over Germany.

He was recalled to serve in the “Korean Police Action” from May 5, 1951 to July 24, 1952 at Pusan Air Base, South Korea. He served as a Navigator-Bombardier, flying 51 missions over North Korea in the “B-26 Invader”, a two-engine bomber.

His dreams came true when he got to retire from his job as business manager at Hal Watkins’s Chevrolet in Southern California and move back to his beloved Clarkdale to live in his father’s house, build a work shop, and spend time with many of his childhood friends in the Verde Valley. They fondly referred to themselves as the “River Rats from Poverty Flats“.

At one time he was active in the Clarkdale Historical Society and shared his many stories. His passions included driving to Sycamore Canyon and around the Verde Valley to enjoy it’s beauty. He has left behind two daughters, Debbie Warren ( husband, Stan), and Nancy D’Angelo (husband, Gary); granddaughter, Miranda Pecsok (husband, Mike) and two great-grandchildren, Mila and Merrick Pecsok (whom he never met, he was born 8/5/2021) and loving niece and nephew, Karen Shaffer (husband, Mickey), Mike Riley ( wife, Kareen). Proceeded in death by his parents, Carl and Nellie Beltz, and brothers, Ervin and Duke.

Those who knew him will understand “Thanks for stopping by”.