Spend the Holidays in Bedford Falls
‘It’s a Wonderful Life’ the musical opens at YCPAC Dec. 16 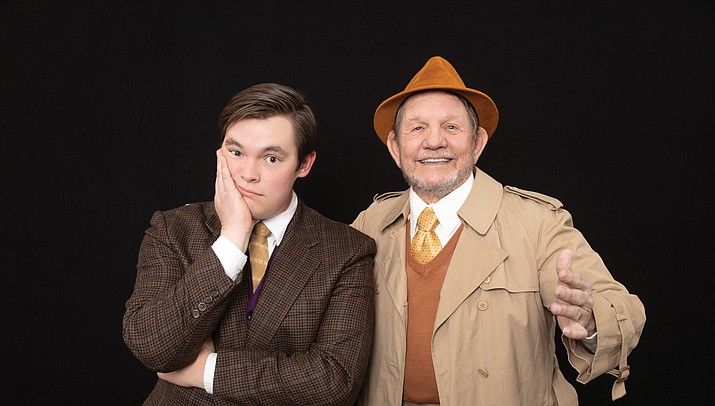 Andre Sylvester (left) as George Bailey and David Salyers as Clarence in YCPAC's musical production of "It's a Wonderful Life." (YCPAC/Courtesy)

A holiday crisis: a good man’s misfortunate leads his community to rally around him, thanks to the work of a ne’er-do-well angel.

This December, Yavapai College Performing Arts invites you back to Bedford Falls for an inspiring reminder about each life’s importance, and how we depend on each other. “It’s a Wonderful Life,” the live musical adaption of Frank Capra’s classic holiday film, returns Thursday night, Dec. 16, and performs through Sunday, Dec. 19, at the Yavapai College Performing Arts Center.

Adapted from the short story, “The Greatest Gift,” Frank Capra’s film “It’s a Wonderful Life” featured Jimmy Stewart, Donna Reed and Lionel Barrymore and marked Stewart’s return to movies after service in World War II. The film premiered during the 1946 holiday season to a lukewarm response, but found a new life on local television stations across the United States, which played it during the wee hours every December. Its story of hope and community built a devoted grassroots following that continues to this day.

The musical version, adapted in 2011 with music by Bruce Greer and book and lyrics by Keith Ferguson, brings Capra’s beloved story to the stage with an invigorating energy. YCPAC’s charming live performances and trademark musical set pieces give Bedford Falls, George’s youth and the harrowing alternate universe of Potterville a captivating dramatic punch.

Performances are 7 p.m. Thursday through Saturday, with matinee performances Saturday at 2 p.m. and Sunday at 3 p.m.

Tickets start at $25 for adults, with $10 youth tickets available. All performances will be held at the Yavapai College Performing Arts Center, 1100 E. Sheldon St., in Prescott. For reservations or further information, please call the YCPAC Ticket Office at (928) 776.2000 or visit YCPAC.com online.