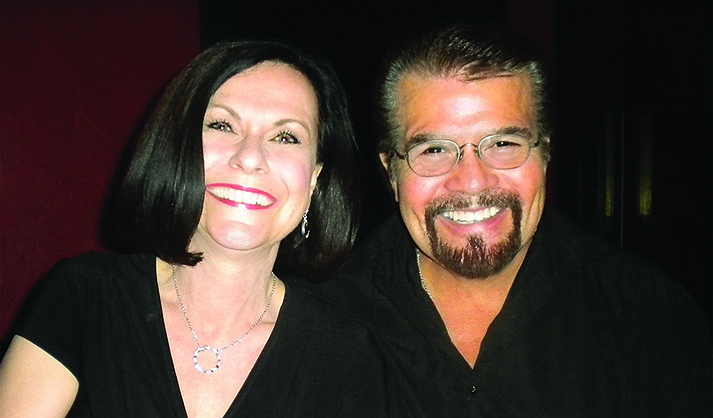 Local musicians Rosemary and Frankie Chavez will perform with their quartet Jazz a’la mode for this year’s Festival of Lights at Tlaquepaque on Saturday, Dec. 11.

They will be playing in this lovely outdoor setting from 6 to 8 p.m. at Patio de las Campanas, where you’ll be treated to their jazzy renditions of your favorite holiday music

Rosemary Chavez’s rich tapestry of musical performances began as a young child in her native Minnesota. She went on to perform with world renowned choral conductor Weston Noble at Luther College where she received her Bachelor of Arts degree. She later reunited with the Weston Noble Alumni Choir for their European tour, where she was a featured soloist.

In Sedona, Rosemary and Frankie’s bands Jazz a’la mode and Platinum have performed at numerous venues including clubs, festivals, concerts and benefits. In Prescott, Rosemary has been featured at the Summer Concert Series in Downtown Prescott and at the Prescott Jazz Summit, performing with the leaders of the Stan Kenton Alumni Band, The Jimmy Dorsey Orchestra and The Harry James Orchestra.

Some of her albums include “A Sedona Christmas,” “Sweet Jazz a’la mode,” “American Voices” and three solos on the movie soundtrack album “Roar.” The National Philharmonic (London) played the soundtrack, and Terence P. Minogue produced the film’s soundtrack album, which was No. 6 in Australia (Festival Records).

As a child, Frankie’s mentor and friend was world renowned drummer Buddy Rich. In high school, Frankie then passed on his musical knowledge to Karen Carpenter of The Carpenters. He was not only her friend and classmate but also her first drum teacher. Frankie was interviewed and included in the bestselling book “Little Girl Blue: The Life of Karen Carpenter,” written by Randy L. Schmidt. He has since been included in two documentaries on The Carpenters with the latest, soon to be released, concentrating on Karen’s drumming abilities.

Jack Petersen is a world class jazz guitarist, pianist, composer and renowned pioneer in jazz education who revolutionized guitar education. Included in his remarkable career of music: He was the first full-time jazz guitar teacher at the Berklee College of Music; he was an influential jazz guitar artist in residence at the University of North Texas College of Music; and he helped build a jazz guitar program at the University of North Florida. Locally, Jack is one of the headliners at the annual Prescott Jazz Summit.

Denny Garr moved to Prescott from Wisconsin. Back in Wisconsin, he was involved with the Madison and Green Bay Symphonies. He studied bass with Richard Davis in Madison and also studied bass with Mike Moore in Bangor, Pennsylvania. Denny attended jazz clinics that involved Frank Mantooth and Kelly Sill and he studied bass with Kelly, from Chicago. Since moving to Prescott, he has done a number of musicals, worked with different trios and quartets in the area, and has remained active in the local jazz scene.