OTCA presents Zenprov Comedy in ‘Dear Santa, I can explain!’ 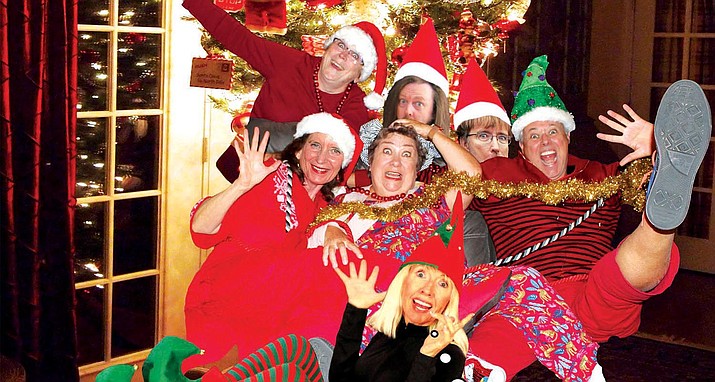 The troupe will perform a sleigh full of new games, including “Isle of Misfit Toys." (Courtesy Photo)

The Old Town Center for the Arts will present the improvisational troupe Zenprov Comedy in a special holiday theme event entitled, “Dear Santa, I can explain!” on Saturday, Dec. 11 at 7 p.m.

The troupe will perform a sleigh full of new games, including “Isle of Misfit Toys,” where the actors take on characteristics of neurotic toys coping with low self-esteem issues on their journey for self-love and acceptance.

“This night is going to be like Christmas morning for us. There’s so much good material to play with around the holidays. From too-petty family dramas to mindless consumerism, it is all fair game,” said Derek Dujardin, the director of Zenprov Comedy.

For more than a decade now, Zenprov Comedy has tapped into the rich source material that comes from living in a community steeped in spiritual seeking, UFOs, vortexes, self-help gurus, psychics, radical vegans and endless roundabouts. While Zenprov Comedy’s may start in the woo-woo culture of Sedona, their otherworldly performances are grounded in the fundamentals of rock-solid improv work, inventive satire, and their constant search for grand truths hidden within the great Cosmic Giggle.

If you’ve never been to one of their live performances before, Zenprov Comedy is similar to the popular improvised TV show “Whose Line Is It Anyway?” The troupe performs a mix of fast-paced improvised scenes created in the moment based on audience suggestions as well as Chicago-style “long form” improv, where scenes and characters interconnect with each other. Unlike sketch or standup comedy, nothing is scripted or prepared ahead of time, so it’s never the same show twice.

Zenprov Comedy embraces the Del Close method of improv acting, which emphasizes the “group mind” that mysteriously develops during a performance. Miraculously, the player’s minds fuse together to create a “super mind” where they practically finish each other’s sentences—and often do. Laughter ensues.

Don’t miss this chance to giggle away any holiday blues with Zenprov Comedy’s completely improvised show “Dear Santa, I can explain!” Doors open at 6:15 pm, and refreshments, including beer, wine, snacks and popcorn will be available.

Tickets are available online at www.showtix4u.com in Cottonwood at Desert Dancer; and in Sedona at The Sedona Film Fest Box Office. Old Town Center for the Arts is located at 5th Street & Main in Old Town Cottonwood. For more information visit OldTownCenter.org

Information provided by Old Town Center for the Arts.