Monday Movies on Main features 'Phantom of the Opera' 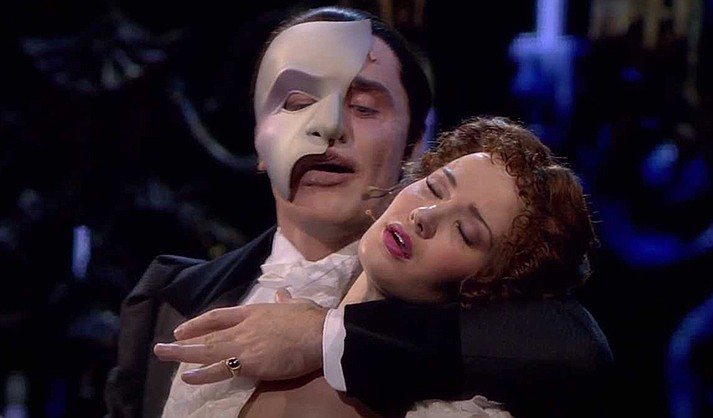 The Sedona International Film Festival is proud to partner with Old Town Center for the Arts (OTCA) to bring movies to Cottonwood!.

“Monday Movies on Main” will feature the Cottonwood premiere of “The Phantom of the Opera” — Andrew Lloyd Webber’s biggest and most celebrated musical — on Monday, Dec. 27 at 7 p.m. at Old Town Center for the Arts.

In celebration of the 25th Anniversary of Andrew Lloyd Webber’s “The Phantom of the Opera”, Cameron Mackintosh produced a unique, spectacular staging of the musical on a scale which had never been seen before. Inspired by the original staging by Hal Prince and Gillian Lynne, this special event features over 200 cast members, orchestra musicians and luminaries involved with “The Phantom of the Opera” over the past 25 years.

With a fully-staged, lavish production, set in the sumptuous Victorian splendor of the Royal Albert Hall in London, the event has captivated cinema audiences around the world. “The Phantom of the Opera” is Broadway’s longest running show and has been seen by over 100 million people worldwide.

Far beneath the majesty and splendor of the Paris Opera House, hides the Phantom in a shadowy existence. Shamed by his physical appearance and feared by all, he haunts the grand Paris Opera House. Sheltered from the outside world in an underground cavern, the lonely, romantic man tutors and composes operas for Christine Daaé, a gorgeous young soprano star-to-be. The love he holds for his beautiful protégée Christine is so strong that even her heart cannot resist. As Christine’s star rises, and a handsome suitor from her past enters the picture, the Phantom grows mad, terrorizing the opera house owners and company with his murderous ways. Still, Christine finds herself drawn to the mystery man.

Tickets are $12 general admission and $9.00 for Film Festival members and $10 for students. Movie concessions will be available, including beer, wine, soft drinks, water, popcorn and a selection of movie candy.

For tickets and more information, please call 928-282-1177. Tickets can also be ordered in advance online at www.SedonaFilmFestival.org.

Because of limited seating, SIFF and OTCA recommend purchasing advanced tickets. Please call 928-282-1177 day of show to check ticket availability for door sales. The Old Town Center for the Arts is located at 633 N. 5th Street (just off Main) in Cottonwood.