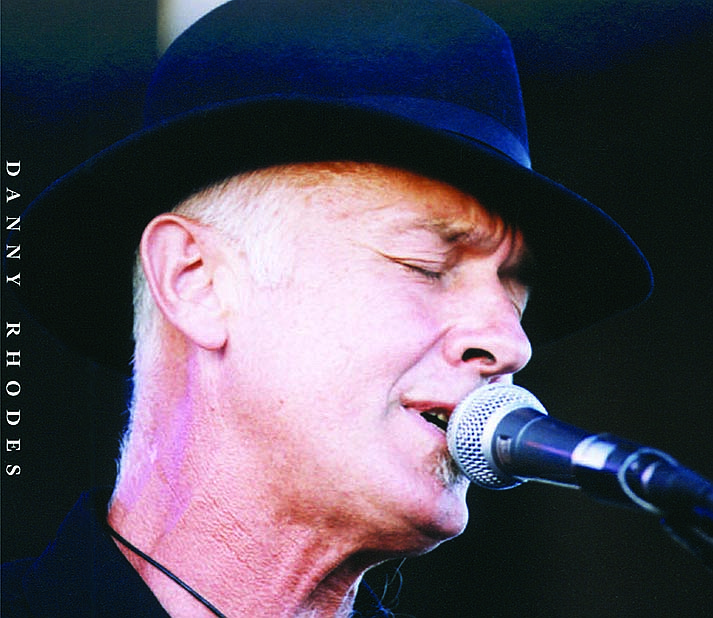 The Rhodes Summit Review pays tribute to the late Danny Rhodes, an inductee in the Arizona Blues Hall of Fame. (Courtesy)

Gabriel Rhodes presents the eighth Rhodes Summit Review Thursday, Dec. 30, at the Main Stage. Doors open at 5 p.m. Show starts at 6 p.m. There is a $5 cover.

The night of entertainment with some of the finest Arizona musicians is all in tribute and remembrance to guitarist, singer/songwriter and AZ Blues Hall Of Fame inductee Danny Rhodes.

Food will be provided by Wicked Good Food. During the Rhodes Summit, there has been an ongoing tradition; a group photo with all the attending patrons wearing the official Rhodes Summit t-shirt. Shirts will be available for purchase during the event. Get a shirt and become part of the history and story of the Danny Rhodes Summit.

Danny Rhodes became a fixture in the local Northern Arizona music scene from 1996 to 2007, as well as touring the United States and taking his music to all corners of the country. Danny is remembered for giving energetic live shows, displaying his virtuosic guitar playing, soulful voice, and his unique songwriting style, taking his inspiration from the blues, funk, New Orleans jazz, funk & blues, and 60's-era rock music.

Danny played in all 50 states, Canada, Japan and Europe. He has also performed on Austin City Limits, the Grand Ole Opry, HBO and the New Orleans Jazz and Heritage Festival.

In the late ‘70s, Danny spent two years in Austin, Texas, and shared bills with Stevie Ray Vaughn and the Neville Brothers.

Later moving to Nashville, he had the opportunity to perform with Dicky Betts, Brenda Lee, Mel McDaniel, Eddie Rabbitt, Charlie Rich, Gregg Allman, Rodney Crowell, Gatemouth Brown and Dash Crofts, among others. He was a staff writer for Warner/Chappell (Warner Bros. publishing company). He wrote songs for several artists, including Etta James. Rhodes’s song, "Get Funky," was the first single from Etta's 'Stickin' to My Guns' album released on Island Records.

In 1996, Danny moved to Arizona and formed Danny Rhodes and the Messengers. The band won the 1999 Arizona Battle of the Bands, went on to open for the Neville Brothers, the Radiators, Tab Benoit, and Sonny Landreth. and released 2 albums, 'Home Cookin'' in 1997, and 'Welcome To The Night' in 2002. In 2006, Danny released his first and only solo album, 'Cairo to Cottonwood.'

Sadly, Rhodes passed away on May 23, 2008. Later that year, Danny's fourth and final album was released, a self-titled double album, compiled of unreleased tracks recorded from 1995-2007, demos and live tracks.

The Toucan Eddy Band formed in Flagstaff, AZ in the late 1970's, founded by singer/songwriter/guitarist Bert Campbell, lead guitarist Dale Cadell, and singer/songwriter/guitarist Thomas Waterfield. The band soon gained a reputation for A Class musicianship and energetic live shows, classifying their music as "Rhythm and Roll", a combination of Rock, R&B, Latin and select original music.

After 10 years together the band would break up, with members going off to seek other musical endeavors, most notably Campbell moving to Nashville to pursue a songwriting career and Cadell forming the legendary AZ group, Limbs Akimbo. The original 3 founders would reform Toucan Eddy in the 90's and the group is going strong to this day. Waterfield would leave to pursue a solo career but sits in with the group on occasion.

From the current lineup : Drummer & Vocalist Joey Rivera Cruz is a veteran musician, not only of the local AZ music scene but also of the California and Nashville music communities. On Sax & Flute, David Russell is a staple from the Prescott Jazz community and has played with various groups over the years. Rounding it out is Bassist/Vocalist John Sarson, simply known as "The Quiet One".

Darryl "Big Daddy D" Porras was born in Los Angeles and moved to Prescott, AZ in 1976, living in Northern AZ until 2005 then moving to and residing in Phoenix.

Picking up the guitar at 17, his first exposure to the Blues was hearing the incomparable Stevie Ray Vaughn. He soon discovered artists like 'Three Kings', Buddy Guy, and Albert King furthering his love and passion for the classic genre.

In 1992, Darryl would join his first band, the Leisure Kings, a band led by Freddie Cisneros, Texan Blues guitarist and AZ Blues HOF Inductee, having been voted "Best Unknown Guitar Player" in Guitar Player magazine in 1989. During his five-year tenure in the band, Cisneros would become a mentor to Darryl, shaping the musician we know today as Big Daddy D.

While living in Prescott, Darryl would also become a consistent presence on the local Blues scene and would soon play for artists such as Chuck Hall, Hans Olson and the Hoodoo Kings.

In 1999, Darryl formed Big Daddy D and The Dynamites. Initially covering blues masters such as BB King, Freddy King and Buddy Guy, the band would go on to incorporate influences from soul, swing and jazz into their sound, forming a distinct sound and feel they’re known for today. Over the years, the band has been a host to many accomplished musicians such as mentor Freddie Cisneros, Roger Smith, Bob Sellani and Ray DeSylvester, all recognized by the AZ Blues HOF.

Well Dressed Wolves (formerly known as 'The Mods') are a rock trio, based out of Phoenix, AZ. The band consists of guitarist Travis Eaton, bassist Louis Occhiline, & drummer Gabriel Rhodes. The band officially formed in the summer of 2004. They quickly found a chemistry that had been lacking in their previous bands, being united by the influences of '60s rock as well as the '90s alternative.

Travis Eaton began playing music at the age of four. Originally inspired by country music, he was exposed to rock 'n' roll after hearing Creedence Clearwater Revival. He then discovered The Beatles and made the decision to pursue Rock music. When he was 10, as a tribute to the Beatles, he began performing in a band called the Moptops. Soon after that, he would join a local rock band called Recall, where he met drummer Gabriel Rhodes.

Rhodes is the son of Arizona Blues Hall of Famer Danny Rhodes, and has been playing drums for over 30 years. Gabriel has played, recorded and toured with 20+ different artists, all ranging from different styles such as Blues, Rock, New Orleans Funk & Hard Rock/Metal to name a few. Rhodes would meet Eaton at a local Battle of the Bands in 1999. Upon discovering a mutual love and passion for the same bands (most notably The Beatles), they would become fast friends and soon after would become band mates, playing in several bands together throughout the next few years. In 2004, after having exhausted many musical ventures, Eaton and Rhodes began playing with a friend of Eaton’s, Louis Occhiline.

Louis Occhiline was born into a large musical family, growing up with a band that was comprised of his 4 Uncle's. At 17 he would pick up the Bass and take an interest in the instrument. With there being a shortage of bassists in the local music community, he learned the basics of the instrument which would lead to the formation of his band, Frequency Response, formed by Eaton & Occhiline while still in high school. The band would split in early 2004, but during this time Occhiline developed his musical style by tapping into the bass styles of Jack Bruce of Cream, John Entwistle of The Who and Paul McCartney to his own.

Since their formation, WDW has released 5 EP's and continues to perform many shows all throughout Arizona. June 2021 marked 17 years since the band's formation. The group is currently at work on a new EP and their first record.