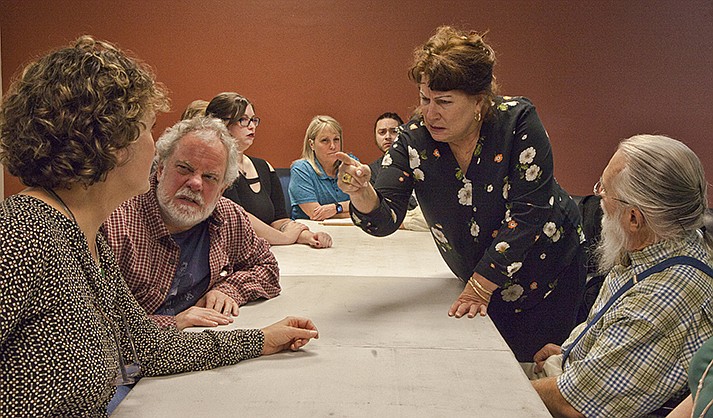 FLAGSTAFF – Theatrikos, founded in 1972, launches the 50th anniversary season with one of the most popular dramas of the American theater.

Theatrikos surveyed Northern Arizona audiences and asked, of all the shows the troupe has produced over the past 50 years, which are the ones they most want to see again. Not counting one show that was done very recently, the most popular choice was “12 Angry Jurors.”

An Emmy-award winning American stage masterpiece, “12 Angry Jurors” is a penetrating and engrossing examination of the deep-seated cultural differences, prejudices, indifference, anger, ignorance and fears that threaten to taint the human spirit. And, in this case, potentially lead to a miscarriage of justice.

Juror #8, voted one of the greatest heroes of literature, slowly convinces the other jurors that following their true moral compass and doing the right thing, while frequently difficult, is ultimately what embodies the best of humanity.

“‘12 Angry Jurors’ is more than a popular timeless classic. Given racial and societal conflicts that we’re going through today, frequently played out in courtrooms across the country, ‘12 Angry Jurors’ is a powerful, gut-wrenching window into the strengths and failings of our criminal justice system,” said director Robert Yowell.

Theatrikos is celebrating its 50th season.

Please note that Theatrikos continues to require proof of vaccination for all patrons. Vaccination cards and IDs are checked upon admission to the theater. For those who can’t be vaccinated, a negative test within 72 hours of the performance is accepted.

“Very cautious safety protocols are allowing Theatrikos to gradually reopen,” said Board President Terri Brenneman. “Our safety protocols are the best way we can continue to create excellent theater while at the same time keeping our flagstaff home as safe as possible.”

The usual opening night reception has been canceled due to the safety protocols. Tickets can be purchased online at Theatrikos.com, by phone at 928-774-1662 or at the box office, 11 W. Cherry Ave., Flagstaff.