Tuzigoot offers visitors a window to the past 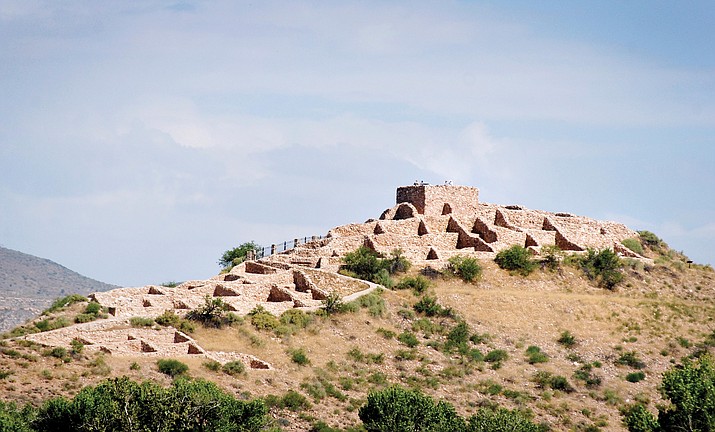 There are stories that were once buried in a hill — and some that are still buried there. L.J. Varon-Burkhart, a park ranger at Tuzigoot National Monument, said those stories are best told by the people with the strongest connections to those ancient communities. VVN/Jason W. Brooks

There are stories that were once buried in a hill — and some that are still buried there. L.J. Varon-Burkhart, a park ranger at Tuzigoot National Monument, said those stories are best told by the people with the strongest connections to those ancient communities.

“We want the stories of historic places to be accurately and respectfully told,” Varon-Burkhart said. “We aim for having indigenous people, whose ancestors lived here, tell all their stories directly.”

After excavation of the Tuzigoot Pueblo began in 1934, it was completed a few years later, and opened in 1939 to the public. Ever since, people with ties to Native cultures have been telling the stories of how the land was used.

“This area thrived so much economically,” Varon-Burkhart said. “There isn’t a lot of history of war around here.”

Varon-Burkhart said tribe and pueblo leaders and historians, such as those from the Yavapai-Apache Nation, have a say in what’s presented at Tuzigoot. Archaeologists and biologists have input as well.

“Most rangers know how much effort and study it takes to really become accurate,” Varon-Burkhart said. “I’ve been here seven years, and I’m just starting to learn the basics.”

Varon-Burkhart said it’s important to present multiple voices, and to not force visitors to think a particular way about a story.

“The Tohono O’odham, Pima and Maricopa all present different perspectives on life in this region,” Varon-Burkhart said. “Our job, as park rangers, is to have people look at the lessons learned from history, and how those apply to the present day. For example, how can we change how we think about water?”

The roof of the museum at Tuzigoot was built to match the ancient beam structure at its sister site across the Verde Valley — Montezuma Castle. The museum was still closed to the public as of late June 2020 due to the COVID-19 pandemic.

The park re-opened to the public June 5 after being closed since March 18, and appears to have its usual steady stream of visitors. The National Park Service is looking into installing plexiglass at the cash register and other now-common cleanliness and safety changes to prevent the spread of a virus. Some of these adjustments were still in the planning stages in June 2020.

Varon-Burkhart said some of the characteristics of are obvious, such as the pueblo rooms with doorways, likely community rooms, compared to the smaller rooms — likely family living quarters — that were only accessed with descending ladders in the center. Other details are not so obvious.

The marsh that runs to the southeast of the pueblo hill is the largest one of its kind in Arizona that isn’t in the Colorado River basin, she said.

Varon-Burkhart said park rangers, and anyone else who sets foot on the hill, are encouraged to come up with new theories about how life existed before, and how we got to this present day. New historical perspectives are always welcome.

“We’re all scientists,” Varon-Burkhart said. “We all could come up with hypothesis and ideas that can be researched, pursued and possibly confirmed in a variety of ways.”

■ Where: 25 Tuzigoot Road, Clarkdale. Take Broadway from Clarkdale or North Main Street from Old Town Cottonwood; turn east on Tuzigoot Road; the visitors center is about 1.5 miles in.

■ How Much: No charge to hike the pueblo trail