Another gourd, another adventure for Nora Graf 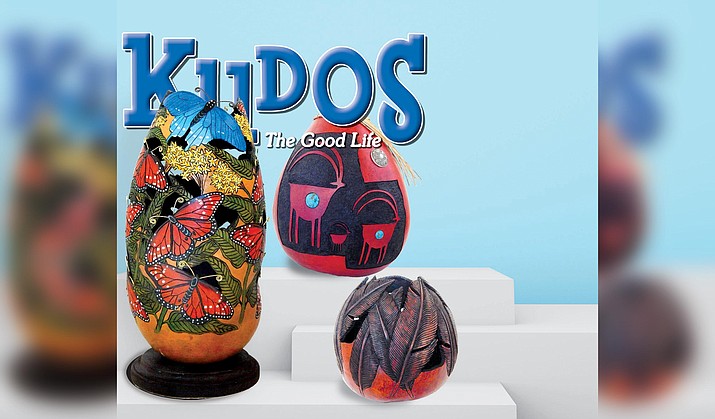 Each gourd is a new adventure for Nora Graf. And Graf, a Camp Verde resident, has been fond of adventures as long as she’s been fond of just about anything.

Each gourd is a new adventure for Nora Graf.

“As a kid, one of the best things we did was travel,” said Graf, who grew up in Tucson, then Scottsdale. “I got to see much of the United States before I finished house school and still love to do it today.”

A lifetime later, Graf worked 20 years at Arizona State Parks such as Fort Verde, Jerome State Park, Slide Rock and for a short time at Tubac Historical State Park before she retired in 2010.

Graf earned a degree in photography from Montana State University. Although she dabbled in art, taking painting, ceramics and printmaking classes here and there, art never really dominated her life – until Graf bought her Camp Verde home in 1993.

“When I finally bought a house in Camp Verde, I finally had a yard big enough for a garden,” she said. “I started out planting the usual things, and sometimes trying something different. Gourds were just an experiment one year (1996 or 1997, she said), something new and fun to add to the garden.”

That first year the gourds, Graf said, grew like weeds.

“The second year they were equally prolific, and by the end of the year, I had a porch filled with gourds and no idea of what to do next,” she said.

Graf didn’t know what to do with the gourds until she learned of a gourd crafting class at the Desert Botanical Garden at Phoenix’s Papago Park. Never did it dawn on Graf that gourds would take over her life.

“When I took the class in gourds, I just thought it was something fun to do,” she said. “It was fun and I played around with the gourds from my garden until I heard about a gourd club starting in Prescott. I grew more gourds and even started buying them to keep working. People are always asking me how I can do all the things I do, because they imagine how difficult it is. I tell them it’s a lot of practice. It didn’t magically happen overnight. So I spent a lot of time practicing, occasionally showing my work to others.”

At the time, making gourd art was just a hobby, although she sold a few at a small Christmas show once a year.

“Really didn’t have time for much more while I was working,” Graf said.

She made some sales, enough for Graf to realize that people liked her art. Having made gourd art for several years by this point, Graf decided to go into the gourd business.

“I’d give it a year and see what happened,” she decided. “Thankfully it worked out.”

Soon, Graf was showing and selling her gourds at between eight and 10 shows a year across the state. Big shows, small shows, shows in Prescott, Litchfield Park, Tucson, Phoenix, Sedona, Casa Grande, and in Pine.

“The shows were fun but hard, and hauling a tent around, putting it up, hoping it wasn’t going to rain or snow – which always seemed to happen in Prescott.

Graf soon realized that the worst weather condition for selling gourds is wind.

“Gourds are very light, and as I quickly learned, if they weren’t weighted down, they would take off down the street at the slightest breeze,” she said. “These days, I’m still doing a few shows but now have my gourds at the Prescott Art Market and just recently joined the Jerome Artists Co-op. I don’t have to worry about wind anymore.”

Graf describes the designs on her gourds as “distinctly southwestern much of the time.”

“Mostly from where I grew up,” she said. “But I am open to new things. I frequently try new designs – just for the fun of it. Some are successful, some not so much, but I like broadening my horizons and even if something doesn’t work it might lead me somewhere else.”

Graf also likes to incorporate wildlife and flowers into her pieces.

“Again, much of it comes from the southwest, but other things creep in, like the like butterflies and flowers in my garden,” she said. “I enjoying learning new techniques and that will drive me to try something new. I like gourds because each one is different and sometimes it’s the gourd that has more to say about the design than I do. It keeps me excited.”

“With the pandemic, I’m not sure if I will be doing any art or street fairs this year,” she said. “I do not sell out of my home, so the galleries are the best places to see my work these days.”