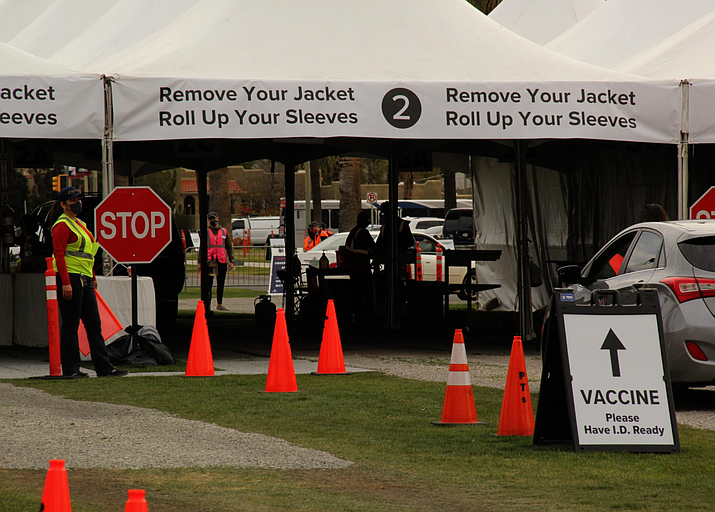 A car prepares to enter the drive-thru vaccination tent at the University of Arizona site in Tucson on Feb. 1. Older Americans – among the most vulnerable to contracting a severe COVID-19 illness – have reported difficulties getting information about vaccines or making appointments to get shots. (Photo by Travis Robertson/Cronkite News)

PHOENIX - On a recent weekday morning, Liz Northcott, 78, logged onto her home computer, went to Arizona’s COVID-19 vaccination registration site and tried her best to make an appointment. Two frustrating hours later, she found a phone number to call instead.

After finally getting through to a human on the phone, Northcott secured first-dose appointments for herself and her husband, Alan, 69 – at 5 a.m. on Valentine’s Day at State Farm Stadium in Glendale, a 45-minute drive from their home in Black Canyon City.

“Just to get the appointment, that was worth it,” Northcott said. But she had tough words for the overall registration process.

“For people who are not very computer savvy, the site is a joke. It’s just a joke. And I can’t imagine why they can’t come up with a better plan.”

Across the country, many older Americans – among the most vulnerable to falling severely ill from COVID-19 – have reported difficulties getting information about vaccines and making appointments to get shots.

A January poll by the Kaiser Family Foundation found that 6 in 10 adults thought their state government was doing a “fair” or “poor” job of distributing the two available vaccines. Among adults 65 or older, about 6 in 10 said they didn’t have enough information about when or where to get shots.

Eighteen percent of Arizonans – about 1.3 million people – are 65 or older.

Across the state, people young and old have been frustrated by confusing and overwhelmed vaccination registration websites, wait times when trying to make appointments by phone, and lack of more widespread access to vaccine doses.

On Jan. 19, the addition of an estimated 750,000 Arizonans ages 65 to 74 to the prioritized 1B vaccination group created additional problems for seniors 75 or older who were trying to land appointments. In many cases, available appointments have been booked up in minutes.

“I definitely think the over 75 vaccinations should have been finished before they went to over 65s,” Northcott said, “because that has made it 10 times more difficult for the 75 and older seniors to get a shot.”

In response to questions from Cronkite News, Gov. Doug Ducey’s office noted that vaccine availability at state-run sites was expanded to those 65 or older based on federal recommendations aimed at more quickly getting more shots into the arms of more people.

Still, the governor’s office said in an email, “Local allocators can further sub-prioritize within each phase based on vaccine supply. Not all counties are vaccinating seniors 65-74.”

For example, Maricopa County, the state’s largest, has not yet opened vaccinations at sites it oversees to those ages 65 to 74, saying it “does not yet have the supply of vaccine needed to vaccinate the estimated 400,000 people” in that age group who live in the county.

Following federal guidelines, Arizona is taking a phased approach to vaccinations. Administration of shots began in December with the Phase 1A priority group, which includes health care and emergency medical workers as well as long-term care facility residents and staff.

On Jan. 11, the state opened up eligibility to the Phase 1B group: educators, child care workers, law enforcement, protective services workers, and adults 75 or older. Eight days later, those 65 or older were added.

It’s unclear when Phase 1C will open up to adults with high-risk medical conditions, or when the general population will be able to start vaccinations.

Because of limited supply, the state is allocating vaccine doses to Arizona’s 15 counties, which are in different phases of prioritization based on available doses. Vaccines are available via state-run facilities, local health clinics and at some commercial pharmacies.

As of Feb. 11, about 1 million COVID-19 vaccines had been administered across the state, including at least one dose to about 400,000 Arizonans 65 or older, according to the state health department. Both the Pfizer and Moderna vaccines require two doses several weeks apart.

Experts note that the risk of developing severe illness from COVID-19 increases with age. An analysis of more than 114,000 COVID-19 deaths from May through August found that 78% of those who died were 65 or older, according to the U.S. Centers for Disease Control and Prevention.

Arizona State University professor Alexandra Navrotsky, 77, who recently was vaccinated at the state-run Phoenix Municipal Stadium, said the site, about 15 minutes from her Tempe home, was much more convenient than traveling 30 to 40 minutes to the 24/7 vaccination operation at State Farm Stadium.

“It makes it more accessible to people. … But I think they really need to get it locally in the pharmacies to get a lot of people to go,” she said. “Until they make it locally available, like the flu vaccine, people are not necessarily going to go to these sites.”

Retired nurse and Navy veteran Yvonne Helmer of Carefree recently received her first dose of the vaccine, but she understands the technical difficulties that can vex seniors when registering.

“Some areas were not clear, and it took awhile to figure out how to get through answering their questions in order to get to the next part,” said Helmer, 78, adding that finding an open appointment was “very tedious.”

“You had to select a date, then a POD (point of dispensing) – only to be told there were no available appointments,” she said. “Then you had to start all over picking another date, then POD. Sometimes you had to repeat the process a dozen times before you found an open date and time.

“My first impression was, ‘Wow, this is way beyond what people really can do.’”

Both the governor’s office and Dr. Cara Christ, director of the Department of Health Services, said officials are working to make the state’s registration site easier to navigate. A “first available appointment” option has been added to allow people to more easily see open dates and times.

“After standing up this site in just a matter of days, we have been working nonstop to improve the registration process, including for second dose appointments,” Christ said in a Jan. 27 statement. “More improvements are on the way, including upgrades to the vaccine registration website to make getting a COVID-19 vaccine even easier.”

In a column published last month in the Chicago Tribune, three University of Chicago doctors called for working to make the vaccination process easier for the elderly by increasing outreach with phone calls and mailers and leveraging caregiver organizations and pharmacies.

In the longer term, they said, groups must work to help seniors grow more technologically savvy.

“As we move to a post-pandemic world … we must urgently measure and improve technology access and literacy among high-risk groups, including our seniors,” the doctors wrote. “That will require health care organizations to screen all patients for technology literacy and implement tailored solutions to address gaps.”