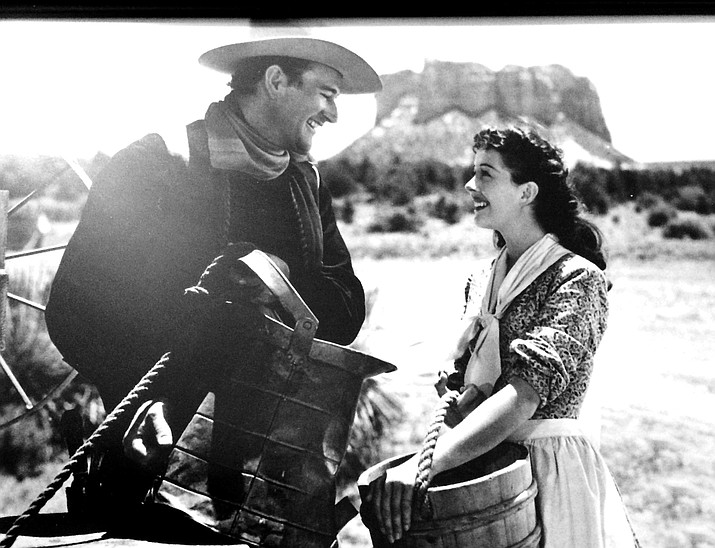 Angel and the Badman, starring John Wayne and Gail Russell, 1947.

Movie history and the Village of Oak Creek share a common beginning. Before World War II, the Village was called Big Park because it resembled a large open treeless park for cattle grazing.

There were only a handful of hardy residents with small ranches scattered off a few dirt roads. It was the wide-open spaces, dramatic backdrop of red rock buttes and absence of people that attracted Hollywood directors to the Village during the heyday of the Western movie genre in the 1940s and 50s. Locals often starred as extras in these films.

Among the many Western movies filmed in our backyard, are notable standouts that include: Angel and the Bad Man (1947), starring John Wayne and Gail Russell, with scenes filmed around Courthouse Butte; Broken Arrow (1950), showcasing Jimmy Stewart in a passionate love scene at Red Rock Crossing, framed by Cathedral Rock towering in the background; Pony Soldier (1952), featuring Tyrone Power; Drum Beat (1954), starring Alan Ladd; and Apache (1954) with Burt Lancaster, Jean Peters and Charles Bronson.

In addition to watching excellent performances of stars of yesteryear, it’s fun to observe the VOC’s familiar buttes and locations you may have recently hiked or biked.

Seventy years ago, there were wagon trains, charging cavalry, settlers and Indians working for studio wages on them thar red rocks.

By the time the 1960s arrived Big Park had been discovered by developers and Westerns were no longer in vogue with the exception of a few screwball Western-themed comedies like The Rounders (1965), starring Henry Fonda and Glenn Ford. Most notable in The Rounders is the openness, absence of homes, trees and traffic in shots filmed south of Verde Valley School Road and west of AZ-179.

Verde Valley School Road was still a dirt road, and the golf course, home building and residential tree planting were not fully underway until the 1970s.

Nine years after The Rounders was made, Director Paul Mazursky’s film location scouts decided The Village was the perfect locale to depict a middle of nowhere, one-story motel pitstop with a lonely phone booth on AZ-179 for scenes in the film Harry and Tonto (1974). Art Carney won an Academy Award for Best Actor for his performance in this film beating out Al Pacino in The Godfather Part II. Harry and Tonto also was nominated for Best Original Screenplay.

The single-story motel where filming was done hasn’t changed much in forty-six years. It’s now called Ranch House Square, located at 6586 AZ-179. In the film it’s called The Sedona Inn.

In his book, Arizona’s little Hollywood, author Joe McNeil registers his astonishment that film fans forget this building is still here, looking much like it did in 1974.

“It’s nothing short of amazing, and more than a little disappointing, that so many Sedona film fans have forgotten the still-standing Sedona location of Paul Mazursky’s Harry and Tonto, especially when you consider the 1974 flick is the only movie with scenes filmed in Sedona to have its star win an Academy Award for Best Actor,” writes McNeil, adding, “About one hour and 15 minutes into the movie, Harry stands by a telephone booth on AZ-179 with Bell Rock and Courthouse Butte looming in the not-too-distant background while his nephew makes a phone call.

The telephone booth sits in front of the Sedona Inn, a motel located in the building that now houses Minami restaurant.”

After watching these films, viewers gain a perspective of how new the Village of Oak Creek actually is and how it once looked.

The Village, in just 46 years, has grown from a mere few hundred souls to roughly 7,500 residents.

And, Big Park, as it was called before we became The Village of Oak Creek, has transformed from a vast, mostly treeless, cattle-grazing landscape into one filled with homes, hotels, businesses and large mature trees.

Yet, the one constant that has not changed are the timeless Red Rock sentinels we call Bell Rock, Cathedral Rock, Castle Rock, Gunsight and Lee’s Mountain -- and, we’re all thankful for that.

Previously a part-time film critic and freelance writer, Mark Moorehead has published more than 300 film reviews and Hollywood insider interviews for Arizona newspapers and was a member of the Phoenix Film Critic Society.