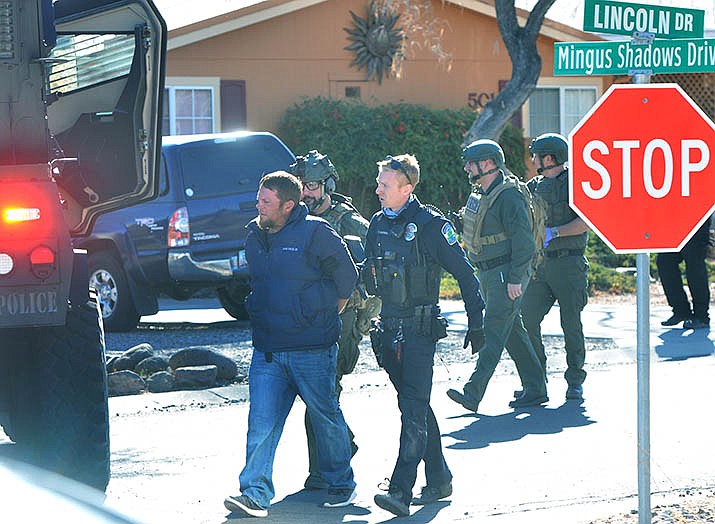 Adam Nathaniel Martins, handcuffed, is taken to a police vehicle after a lengthy standoff Friday in Clarkdale. He was charged with disorderly conduct per domestic violence, threating per domestic violence, and weapon violation-prohibited possession after Verde Valley SWAT took him into custody Friday afternoon. VVN/Vyto Starinskas

CLARKDALE — A standoff at a home in a Clarkdale neighborhood lasted more than four hours Friday before a man was taken to jail.

At about 10:30 a.m. Friday, Clarkdale police officers responded to a domestic violence situation in progress at 501 Lincoln Drive. Upon arrival, officers contacted two involved people and learned of a third person, Martins, who was barricaded in a trailer parked on the same property.

Officers were informed that Martins made threats of bodily harm before barricading himself in the trailer. Officers attempted to make contact for several hours, but he refused to talk.

Verde Valley SWAT was called to the scene to assist. Negotiators contacted Martin, but all attempts from negotiations failed and he refused to exit the trailer, the release said.

SWAT began forced entry procedures and Martin exited the trailer and gave himself up peacefully.

Additional information will be posted on the Town of Clarkdale website at http://www.clarkdale.az.gov when it becomes available.