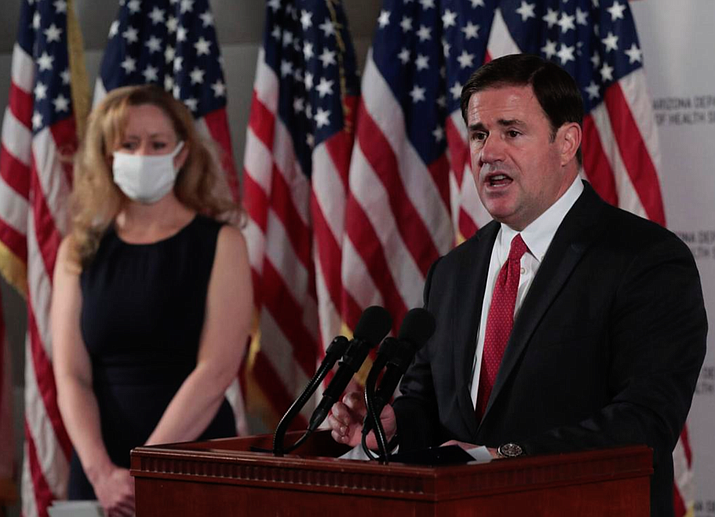 Would Gov. Doug Ducey, shown here with state Health Director Dr. Cara Christ behind him, sign a law that goes against his own directive allowing municipalities to impose COVID-19 mask requirements? A House committee has passed a Republican sponsored bill that would allow Arizona business owners to decide whether to enforce mask mandates for employees and customers, a move supporters say promotes freedom and critics call a threat to health and safety. File photo

PHOENIX – A House committee has passed a Republican-sponsored bill that would allow Arizona business owners to decide whether to enforce mask mandates for employees and customers — a move supporters say promotes freedom and critics call a threat to health and safety.

“It’s a simple bill – it restores the freedom and the liberties back to the individual, and the individuals that own a business, to make their own decisions,” said newly elected Rep. Joseph Chaplik of Scottsdale, a sponsor of House Bill 2770.

The House Commerce Committee on Tuesday voted 6-4 along party lines in favor of the bill, which runs counter to many city and county government requirements to wear a mask to combat the coronavirus that causes COVID-19. Gov. Doug Ducey has not issued a statewide mask requirement but last year allowed local governments to establish such rules.

Chaplik, who spoke while wearing a face shield, referred to emails of support he has received.

“Anything can be made into a mask, so it’s not about safety, it’s about compliance,” one read.

“Private businesses should have the freedom to enact their own health protocols,” read another. He said most emails he received support the bill, and he did not read any opposition emails.

Chaplik’s fellow Republicans did not explain their “yes” votes, but Democrats spoke up.

“We are wearing our masks, we are trying to be safe, and I really resent that this bill is being put forth today,” said Rep. Charlene Fernandez of Yuma.

Several organizations, including the Arizona Chamber of Commerce & Industry and Arizona Medical Association, encourage mask wearing, as do most Arizona businesses. But some business owners, who have faced state-ordered temporary shutdowns and limited traffic during a nearly yearlong pandemic that has decimated small businesses and the U.S. economy, are pushing back against restrictions.

Chaplik proposed HB 2770 in early February, when new cases of COVID-19 began to fall after months of escalation. Vaccinations also are increasing daily, with 1.15 million Arizonans now vaccinated with at least their first dose but thousands more still awaiting their turn.

Health experts warn that guidelines must continue to be followed for everyone’s safety, including wearing masks. According to the Centers for Disease Control and Prevention, even those who have been vaccinated still might be contagious, and it’s important to continue taking safety precautions until there is more knowledge about the vaccines.

The CDC recently updated its mask guide to include information about how to properly “double mask,” as new research suggests two masks offer greater protection against the disease.

In the absence of a statewide mask mandate, multiple Arizona cities have full mask orders in place, including those in the state’s most populous counties, Maricopa and Pima. In Tempe, police officers are hoping to work with the community and local businesses to enforce wearing masks.

Since the pandemic began to alter daily life in Arizona nearly a year ago, some businesses and customers have defied orders about wearing masks or how to operate. Although some owners contend they’re acting on principle, for others, defiance is necessary to stay in business.

According to The Arizona Republic, there were more than 3,500 complaints made to metro Phoenix police and the Maricopa County Sheriff’s Office regarding businesses not following guidelines, yet fewer than 75 businesses were cited or referred.

On Chaplik’s campaign website, he states that “while there was a lot of uncertainty early on with COVID, a lot more is known today and it is time to get Arizona on the road to recovery.”

In an interview Tuesday with KNST-AM’s Garret Lewis before the committee vote, Chaplik said the bill takes “law enforcement out of the private businesses” and restores “freedom and liberties for individuals to make their own decisions.”

Chaplik said he isn’t opposed to people choosing to wear a mask, but the government should not “force everybody, including the healthy, to wear the mask.” Masks, he contended, shame and dehumanize people and cause depression.

The CDC has cited numerous reports that conclude the effectiveness of masks, especially N95 masks, in fighting the coronavirus. It says more research is needed into how cloth masks work in terms of materials, layers and other factors.

The measure still needs to move through several votes in the Legislature.