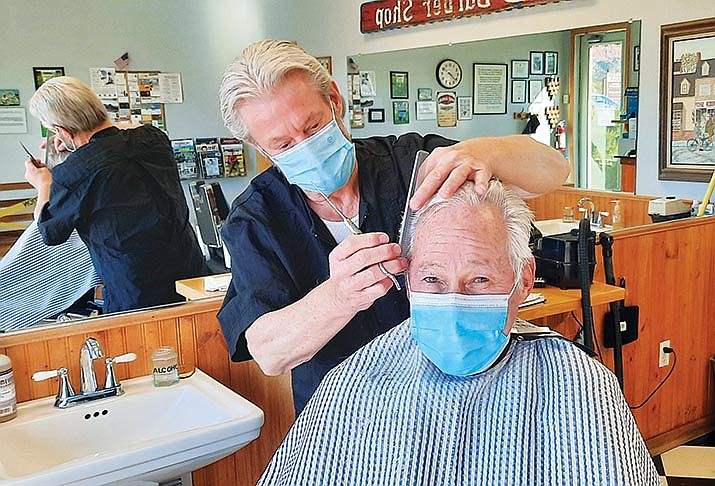 Dennis Errera has been cutting hair in the same Village of Oak Creek barbershop for a quarter-century.

That’s set to come to an end Friday, March 5, when Errera plans to retire, closing The Village of Oak Creek Barber Shop.

Known in the VOC as “Dennis the Barber,” the longtime Chicago resident was in construction and even delivered mail for the U.S. Postal Service before he started cutting hair. After 20 years of cutting hair in the Chicago area, Errera and his wife, Darlene, decided it was time for a change.

Errera, 73, has been able to lease the same shop in Bell Rock Plaza for 25 years — a feat in itself. The shop faces east, with its large window providing a view of the sunrise and the bluffs east of the village.

“Not many barbers probably have a view like this one,” said Gordie Garvey, who was in for a trim on a recent day.

Garvey, who is retired, said he’s been coming to Errera to get his hair cut for about three years.

Errera estimates about 15% of his customers are women, and about 98% are return customers. “Dennis is about the nicest guy you could ever meet,” said Patrick Murphy, another longtime customer. “If you forgot your wallet, he’d just say, ‘We’ll get you next time.’”

While Murphy insists Errera is a source of water-cooler-type information for the Village, Errera said he hears more scuttlebutt from customers than he dishes out.

“I don’t know where I’m going to get my information now,” he joked.

Herrera and his wife of 47 years, Darlene, have been able to build a home in the La Barranca area. However, they won’t spend much time there, he said, as the couple plan to travel more, especially to see their two grandchildren.

“We got one on the west coast, and one on the east coast,” Errera said. “And I’m not a fan of flying.”

Errera said he isn’t sure how many haircuts he usually does in a week or a month — he just knows he’s open 10 hours a day, and only cuts hair by appointment. When the COVID-19 pandemic hit last spring, the five weeks Errera was out of work marked one of the longest times of not working in his adult life.

Errera said he doesn’t know which barbershop or salon his customers will visit in the future. There is one other barbershop in the Village of Oak Creek and two he knows of in Sedona proper, so there is likely room for anyone wanting to cut hair in the area.

“This building is for lease, too,” he points out.

Errera said he remembers when State Route 179 had a single stoplight in the VOC — along with zero roundabouts, and not nearly the development it has today.

“It used to be spring break and a few other times, it was real busy,” Errera said of tourist traffic. “Now, it seems to be busy all year long.”

Getting supplies during COVID-19 hasn’t been much of a challenge, Errera said, because he can order from any number of online sources. Errera said owning a building or a business with employees was never priorities to him.

“Some things, I find, it’s better to rent than to own,” he said.