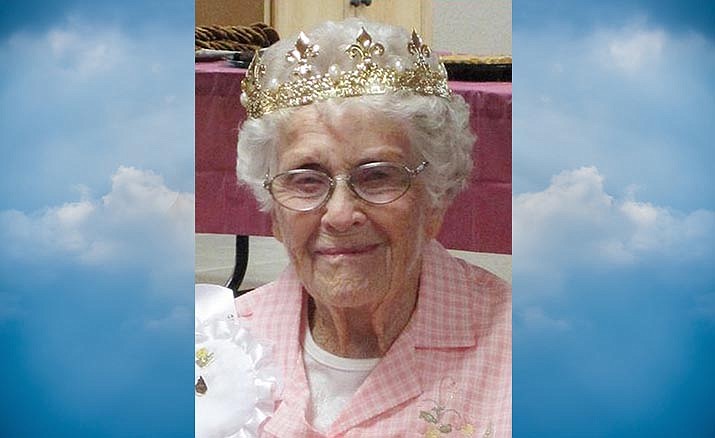 Marjorie Ethel “Peggy” Funk, 99, of Cottonwood, Arizona, passed away peacefully in her sleep on Sunday, February 21, 2021, at 1:30 p.m., at the Agape Terrace Assisted Living facility in Cornville.

Peggy was born in Beaver City Nebraska on January 25, 1922. She was the only daughter in a family of seven boys.

She moved to Los Angeles in 1941 where she met and married her husband, Frank that same year. They were married 71 years until Frank passed away in 2012 at age 96.

They moved to Cottonwood in 1980 and became active in the community as members of the ham radio club, garden club, Working Artists of Yavapai County and attended Haven United Methodist Church in Jerome.

She was known by those who met her as warm, kind, supportive and engaging. She had many friends of all ages and often said the way to stay young was to have younger friends.

Peggy enjoyed painting and recently published a memoir through Amazon.com titled Seen from My Window. She was the matriarch of the family and connected everyone.

Peggy is survived by her sons, Paul, Rex, Don and Bob and her daughters-in-laws, Lujet, Annette, and Terri; her grandchildren, Amanda, Will, Mike, Bonni, Chelsea and Bianca; great-grandchildren, Travis and Sadie and her nieces. Martha Leschber and Joan Funk, whom she helped raise. She was the last of her siblings to pass.

Bueler Funeral Home is arranging for cremation. A memorial service will be announced by the family at a later date. The family requests that donations be made to Verde Valley Sanctuary in lieu of flowers.