Governor to deliver annual address, but not in front of legislators 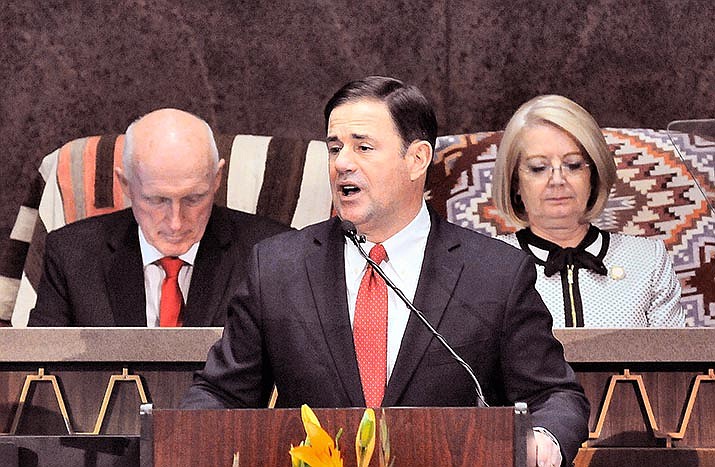 Gov. Doug Ducey giving his State of the State speech in 2020, with House Speaker Rusty Bowers and Senate President Karen Fann listening on. This year, citing COVID-19, the governor will be delivering his speech to the legislature via closed-circuit TV. (Capitol Media Services file photo by Howard Fischer)

PHOENIX - Gov. Doug Ducey is going to give his penultimate State of the State address Monday from the safety of his own office.

In an announcement Monday, press aide C.J. Karamargin said his boss is simply complying with what the federal Centers for Disease Control says is the prudent choice to avoid further spread of COVID-19.

There is a constitutional requirement for the governor to communicate with the legislature every session about "the condition of the state.'' The constitution also requires him to "recommend such matters as he shall deem expedient.''

But there appears to be no specific requirement for an in-person speech in what has become for many, Ducey included, a chance to detail all of the prior year's accomplishments to an audience of mostly partisan supporters. Instead, the requirement is only that he provide a "message'' to the legislature, with no method specified.

"We are fulfilling our responsibilities with the address,'' said Karamargin, saying all governors have given in-person speeches.

"Gov. Ducey will follow that tradition,'' he said, even if the remote speech is apparently unprecedented, to comply with those CDC guidelines.

The governor, however, did not shown similar concerns in a series of rallies he held last fall with President Trump. Neither the governor nor the president wore masks, nor most of the thousands of Trump supporters in crowds both in front of and behind the stage.

Karamargin declined to answer any questions about what is different now and why it is less safe to have a speech from the House chambers where attendance can be limited than it is at a rally.

A remote broadcast also means that Ducey will not run into reporters with questions following his speech as he leaves the House floor.

One other thing that will be different is that there will be no need for the governor to pause at spots in his address that speechwriters have designed as applause lines, usually marked on the prompter he uses with type in a different color. This time there is no audience to react.

The governor cannot run for reelection after his current term ends in 2022, meaning he gets only one more opportunity, after this year, to give a State of the State speech. Ducey has not said what his future political plans entail.

Ducey's decision to avoid going to the legislature should not affect other plans by the House and Senate to separately convene and formally choose their leaders for the next two years. The governor's speech is expected to follow around 2 p.m.