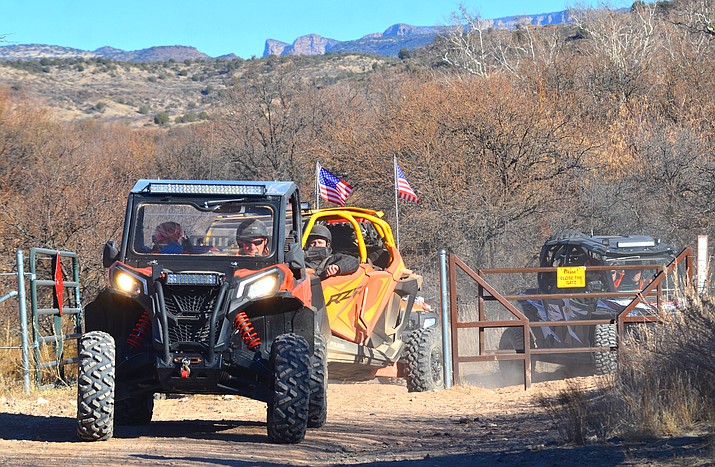 The Yavapai County Sheriff’s Office said a hiker discovered human remains Friday afternoon, about two miles northeast of the McGuireville I-17 rest area. While YCSO couldn’t confirm the identity of the remains by Tuesday, the agency did mention that the medical examiner’s office is in contact with the family of a California man, Shane Rollman, who went missing in the area in September. Several more days might be needed to use dental records to attempt to identify the remains. VVN/Vyto Starinskas 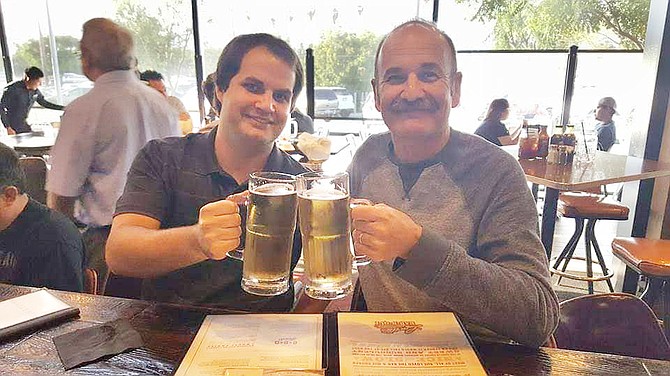 Shane Rollman, left, and his father enjoy beers in a photo taken recently. Shane disappeared in the Camp Verde area in September, with his car, laptop and mobile phone found at the McGuireville rest area. Submitted photo

RIMROCK — Human remains found along a remote trail in the eastern Verde Valley have not yet been positively identified, according to the Yavapai County Sheriff’s Office.

YCSO also said a detective is assigned to the case and awaiting a disposition from the medical examiner as to identification, along with cause and manner of death, if determined.

The Sheriff’s Office acknowledged that a West Covina, Calif., man, Shane Rollman, 31, went missing in September after having been present in the same area.

“We would like to thank everyone for your support and help in trying to find Shane,” the family member wrote Monday in a Facebook post. “Sadly, it appears that his remains were found … We have to wait for the coroner’s report for further details and official notification. Shane will be coming home soon, where he will be laid to rest.”

Friday, at about 1:30 p.m., YCSO deputies were dispatched for a report of human remains discovered by a hiker in the McGuireville area, north of Rimrock. GPS coordinates placed the hiker near Dry Beaver Creek in a small wash about two miles northwest of the McGuireville rest area, according to YCSO.

Deputies hiked into the area and confirmed the human remains, which were in an advanced state of decay, YCSO said. The remains were at the bottom of a sandy wash in thick brush.

With the sun going down, recovery of the remains wasn’t done until Saturday morning. Under the direction of YCSO Forest Patrol deputies, members of the Yavapai County Search and Rescue Team’s Back Country and Quad unit helped deliver the remains to the medical examiner. YCSO evidence technicians were also on scene.

Shane Rollman’s BMW 328i was found, with an empty gas tank and a laptop and mobile phone inside, at the McGuireville rest area — less than three miles from the place his body was found — Sept. 23, YCSO said. That happened about 10 days after the last ping by Shane’s phone, in Arizona, and 11 days after he was last seen by any security cameras.

Rollman, 31, according to video surveillance and bank records, shopped at Bashas’ supermarket in Camp Verde and fueled up a Chevron gas station Sept. 13. He hasn’t been seen or heard from since.

Rollman also removed $700 cash via an ATM in the Camp Verde area.

Where Rollman went between his phone ping on Sept. 14 and the afternoon of Sept. 24 — when his car was found — is unclear.

Rollman’s parents came to the Verde Valley in September to meet with first responders. Searches were done by helicopter, infrared technology, horseback and off-road vehicle. Nothing was found.

Their son had left suddenly, without packing any type of suitcase or traveling items.

In Rollman’s car was an ice cream cup from Bashas’ and a water bottle from Love’s (Travel Stop, the nearest location being in Williams), but not the kind of trash or items one would expect to see if someone were traveling.

Monday night, there were thanks given to the many Verde Valley first responders, volunteers and others who helped search for Rollman.

“We all loved him and know he will be missed,” the family member wrote on Facebook. “We are broken-hearted. He was a wonderful son and person.”