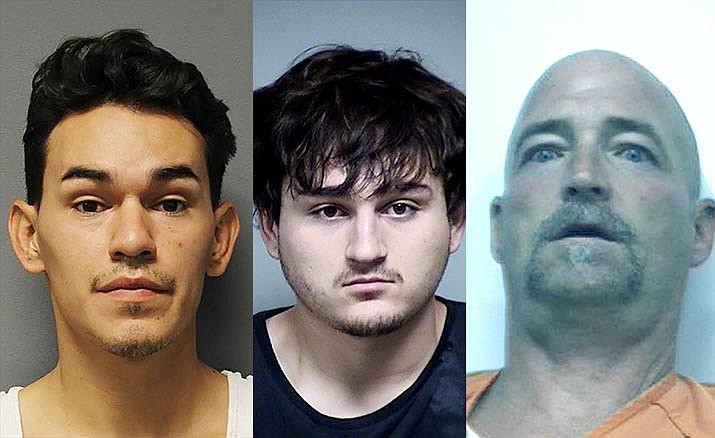 All tips are always anonymous. Callers never have to give their names.

Anyone providing information leading to the arrest of these three fugitives could be eligible for a $500 cash reward.

Thomas Flores Lopez’s last known address is in Bronx, New York, but he also has ties to the Camp Verde and Mesa areas.

Lopez, 30, has violated his probation. He was initially charged with criminal trespass in the first degree, aggravated assault, disorderly conduct and criminal damage in a 2016 incident in Cottonwood.

On Aug. 6, 2016, Lopez went to a residence where his ex-girlfriend was staying in the 1600 block of East Franquero Lane in Cottonwood. After being refused entry, Lopez was able to enter the home through a window. Lopez tried to kick in the bathroom door, then assaulted the victim by pulling her through the house and pushing her into a shelf, causing injury to her hand. The victim’s small child was asleep in the home at the time.

Lopez also broke the front door to the residence.

He has a nationwide extraditable warrant with a $20,000 bond. Lopez is described as a Hispanic male, 5-feet, 11-inches tall, 170 pounds with black hair and brown eyes.

He has multiple tattoos to include what appears to be a Chinese symbol on his neck and a “480” tattoo on his hand.

Also sought is Jose Bermudez-Felix, also wanted on a probation violation. His last known address was in the 3600 block of East Maricopa in Cottonwood.

Bermudez-Felix, 23, was charged with aggravated assault, two counts of disorderly conduct, and endangerment (to his child) in 2018.

On Aug. 6, 2018, Bermudez-Felix got into an argument with his girlfriend. Bermudez-Felix then slapped the victim and struck her with a closed fist to the face.

He then threw the victim on the bed while she held their 1-year-old baby, then threw his victim on the ground and kicked her in the ribs. As she screamed for help, he stuffed a sock in her mouth to keep her quiet.

The victim was able to escape and get to a friend’s residence, but Bermudez-Felix was there waiting for her when she arrived. He grabbed her by her arm and shoulders and attempted to make her leave with him.

Bermudez-Felix fled when police were called. After multiple attempts to locate him, on Oct. 27, 2018, a YCSO deputy located Bermudez-Felix and arrested him.

Bermudez-Felix currently has a nationwide extraditable probation violation warrant. He is described as a white male, 5-feet, 7-inches tall, 200 pounds, with brown hair and brown eyes.

Clarkdale police seek the public’s help in locating 60-year-old John Gregory Lukasik. In 2010, Lukasik, now 60, is accused of taking sexually explicit photographs and video recordings of two separate victims and displayed them on the internet on multiple sites.

Most of the photos and recordings were taken without the victims’ consent and all were posted without consent. He was also found in possession of marijuana, possessed the equipment for propagating marijuana, and possessed a firearm in the commission of a felony. In addition, Lukasik repeatedly harassed one of the victims.